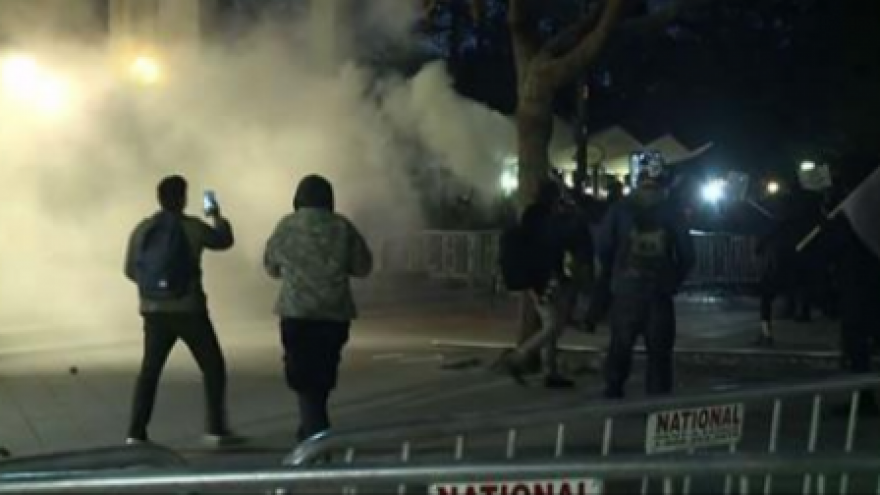 Yiannopoulos was making the last stop of a tour aimed at defying what he calls an epidemic of political correctness on college campuses.

With masked activists joining the already large group of protesters gathered in the area between Sather Gate and the north end of Telegraph Avenue as night fell, campus police were holding their positions near the entrance of the UC Berkeley student union building hosting the event.

Protesters began throwing bricks, lit fireworks and rocks at the building. Some used police barriers as battering rams to attack the doors of the venue and lit fires outside the venue, including one that engulfed a gas-powered portable floodlight.

At about 6:18 p.m., UC campus police announced that the event had been canceled. Officers ordered the crowd to disperse, calling it an unlawful assembly.

Police then moved to lock down the entire campus.

Hundreds of protesters were observed at Wednesday evening’s event. Over 2,100 people responded to a Facebook post that they would be attending.

UC Berkeley spokesman Dan Mogulof said earlier Wednesday that the university Police Department called in officers from other UC campuses in the area, including Davis, and could ask for help from Oakland police and the Alameda County Sheriff’s Office if necessary.

He said that they have studied how the protests have escalated at other campuses and planned accordingly.

“The concerted effort was to really take a close look at lessons learned at other events,” Mogulof said.

Several student groups had called for protests and pledged to shut down the evening event. A number of Yiannopoulous’ talks at other campuses have been canceled due to protests or security reasons.

The 32-year-old right-wing provocateur is a vocal supporter of President Donald Trump and a self-proclaimed internet troll. He was banned from Twitter after leading a harassment campaign against “Ghostbusters” actress Leslie Jones.

His visit to Berkeley was sponsored by the campus Republican club. The university has stressed it did not invite Yiannopoulos and does not endorse his ideas but is committed to free speech and rejected calls to cancel the event.

On Wednesday, the university sent a notice to all students that warned of crowds near the student union, where the 500-seat, sold-out event was scheduled.

“We anticipate there will be major protest/ demonstration activity leading up to and surrounding this event,” the letter from school officials said. It did not discourage protests but advised those who didn’t wish to participate to avoid the area.

Pieter Sittler, a spokesman for the Berkeley College Republicans, said the club doesn’t support everything Yiannopoulos says but “he gives a voice to repressed conservative thought on American college campuses.” He uses “levity and humor” that should not be taken literally, Sittler said.

Yiannopoulos’ talks have sparked protests, shouting matches and occasional violence at stops around the country. A man was shot and wounded at protests outside his Jan. 21 talk at the University of Washington.

Rowdy protests at UC Davis Jan. 13 prompted campus Republicans to cancel his appearance last minute. His last stop was supposed to be UCLA on Thursday but the invitation was rescinded, making Berkeley his grand finale.

TM and © Copyright 2017 CBS Radio Inc. and its relevant subsidiaries. CBS RADIO and EYE Logo TM and Copyright 2017 CBS Broadcasting Inc. Used under license. All Rights Reserved. This material may not be published, broadcast, rewritten, or redistributed. The Associated Press contributed to this report.