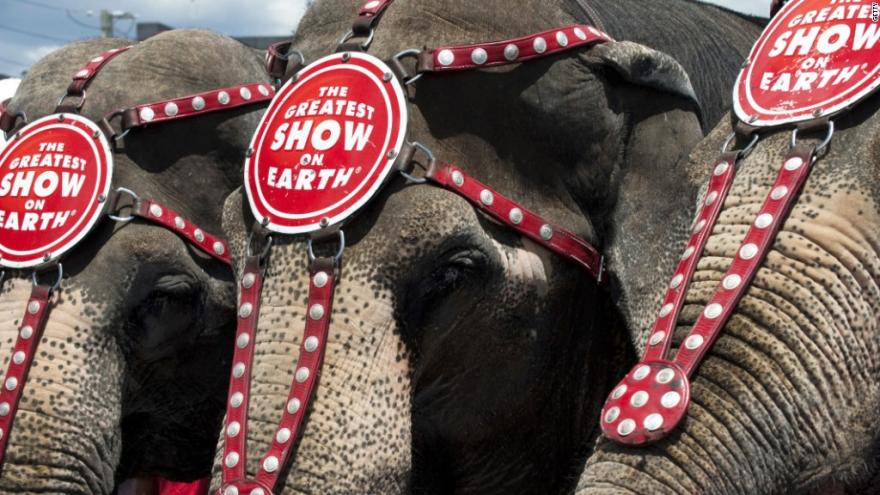 (AP) — As the Ringling Bros. and Barnum & Bailey Circus performed its second-to-last show Sunday afternoon, a group of retired and former circus performers sat across the street at a hotel bar, laughing and hugging and sharing memories of tours past.

Known as Father Jerry, the Catholic chaplain waved at a group of clowns at the bar. Nearly all of the folks at the bar said they were headed to the final 7 p.m. performance, but first, they needed a trip down memory lane with people who were, and always will be, part of a unique family.

"It's 146 years of tradition, older than American baseball," said David Gregg, a clown from Hollywood, Florida. "This was one of the last nomadic tribes running around the country."

The circus has wowed crowds for decades with its "Greatest Show on Earth," and is taking its final bow Sunday evening.

The final performance is at the Nassau County Coliseum in Uniondale, New York, about 30 miles (48 kilometers) east of New York City.

Feld said Sunday that while he is melancholy about closing the production, he feels the performers are energized to "go out on top."

"We all have to embrace change," he said. "But there is a love for the circus that will never die. Our family has given a half century of life to something that would have ended 50 years ago."

Over the years, animal rights activists had targeted the circus, saying that forcing animals to perform and transporting them around the country amounted to abuse. And in May 2016, the company removed elephants from its shows, but ticket sales continued to decline.

Bello Nock, who is often called "The World's Greatest Daredevil," says it's emotional to see the final shows.

Nock, who has a signature shock of two-foot-tall blond hair, performed with the Ringling circus from 2000-2008, spoke Sunday just before the second-to-last ever circus show. His parents met at the Ringling circus in 1954 and said the show inspired generations of performers.

"Every single circus in America used Ringling Brothers as their compass," he said.

Once a mainstay of entertainment in small towns and big cities across the country, Ringling had two touring circuses this season, one of which ended its run earlier this month in Providence, Rhode Island . That show was the more traditional, three-ring circus, while the one performing this weekend has a narrative storyline. Called "Out of This World," it's set in futuristic outer space, with Ringmaster Johnathan Lee Iverson narrating in his signature baritone.

It's an arena show, with an extravaganza of big cats, motorcycle stunts, clowns performing death-defying tricks, ice skaters and Mongolian contortionists — and that's just the first half. The second half includes more aerialists, hoop divers, basketball players in unicycles and an act that the circus staff calls "The Fuzzies," featuring dogs, pigs, llamas and goats.

There are mild explosions and flashing lights. It's a sensory overload, but one that captivates the little ones, as does the giant, branded boxes of popcorn and the snow cones in big cat mugs.

In the end, though, Feld executives said they knew the circus couldn't compete with iPhones, the internet, video games and massively branded and carefully marketed characters. Their other productions — Frozen on Ice, Marvel Live, Supercross, Monster Trucks, Disney on Ice — resonate better with younger generations.

And so tonight, sometime after 9 p.m., the Greatest Show on Earth will be no more.