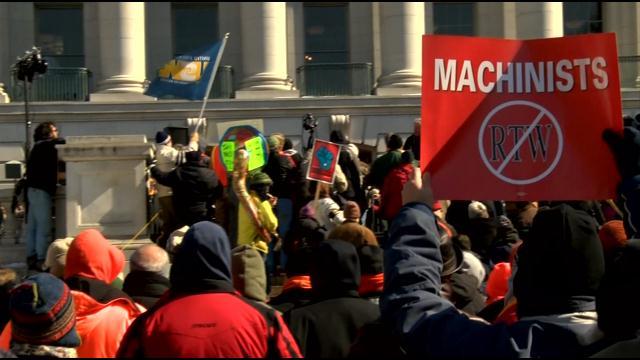 Protesters chant on Wisconsin's state capitol in hopes of stopping Right to Work from getting passed in the state house assembly.

David Groth says his union is already hurting, \"We've had terrible retention of young teachers, there's been money taken away through act 10 and I believe this is the kind of thing that is going to happen to all union employees is right to work goes through.\"

Thousands chanted in Madison hoping to send a message to state assembly representatives who are expected to vote next week.

Ark Wigdal, who works for the Madison School District, \"I'm not a terrorist. I'm dressed up like one. If they think we're terrorists... Well how many people got arrested today?\"

With both the state assembly and state senate are dominated by republicans. Right to work is expected to pass, something State Representative Rob Hutton says will help business.

Rob Hutton, State Representative from Brookfield says, \"As we've talked to manufacturers right to work continues to be on the top of their criteria for where they want to go.\"

Hutton says many other neighboring states already have right to work laws.

\"We have the votes to get it passed, it will likely be along party lines but hopefully not.\"

There will be a hearing on Monday and it will likely be voted on late in the week.