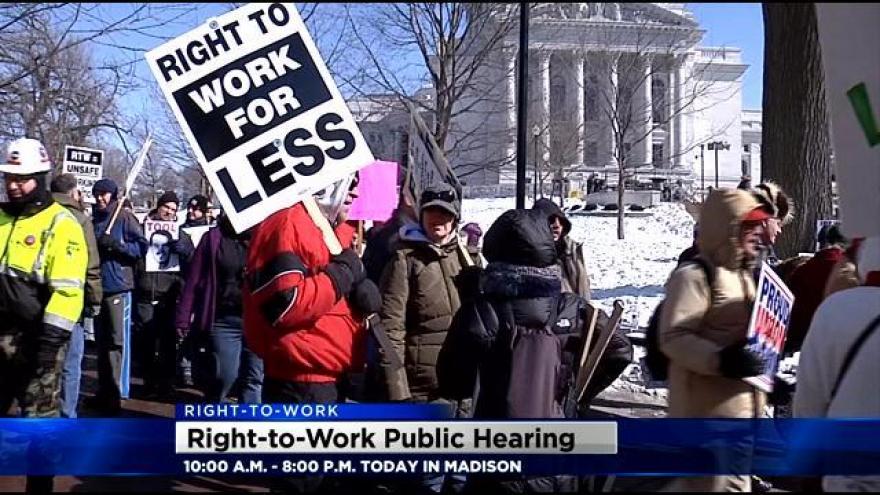 Milwaukee -  The Assembly Labor Committee has a ten hour hearing Monday, where the public has an opportunity to voice their opinion and they are expected to do so well into Monday night.

If passed by the Assembly and signed into law the hotly debated Right-to-Work bill would guarantee no person has to join a union or pay union dues as a condition of their employment.

The Senate passed the measure last week and it is expected to pass the Assembly later this week, but not before the public has a say.

Those opposed to the bill complained last week after the Senate cut off testimony. A Janesville teacher says he thinks right to work doesn't work for teachers and fears what it will do to other unions.

"I've seen what its done to the teachers in the state and in Janesville, we have not had any significant movement for three years in our contracts, we have had terrible retention of young teachers. There's been very little or money taken away through Act 10 and I believe this is the kind of thing that will happen to all union employees if right-to-work goes through," said David Groth.

But State Representative Rob Hutton says it will attract businesses to the state.

"We have talked to manufacturers around the country, looking to relocate, looking for the right environment for their businesses. Right-to-work has continued to be on the top of the list for those companies in terms of the criteria for where they want to go," said Hutton.

The full Assembly is expected to vote on the bill later this week.