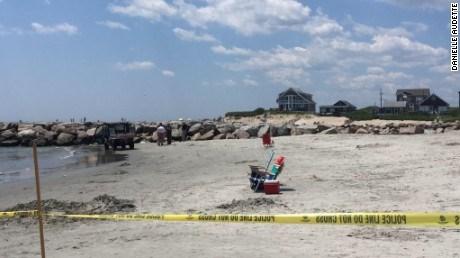 (CNN) -- A Rhode Island beach was evacuated Saturday while a bomb squad investigated an apparent explosion that injured a woman, authorities said.

\"We believe there had been a small explosion, sub-surface, that erupted out of the sand and virtually caused one of our beach patrons to ultimately fall backwards and forwards\" and land on the rocks of the jetty, Larry Mouradjian of the state department of environmental management said at a press conference, reported CNN affiliate WPRI.

So far, there's no evidence an explosive device was involved in the blast at Salty Brine Beach, said Kurt Blanchard of the Rhode Island Environmental Police.

The state bomb squad and the state fire marshal's office are investigating, along with the U.S. Bureau of Alcohol, Tobacco, Firearms and Explosives.

The 50-year-old woman was reportedly alert, but Mouradjian said he had no details on her condition.

Nobody else was reported hurt, but the beach at Narragansett was declared off-limits to beachgoers the rest of the day. Mouradjian said he expected the beach to reopen Sunday.

Mario Lewis of West Greenwich told the Providence Journal he was collecting crabs when heard what appeared to be an explosion that knocked over a woman about 3 feet from him.

Mouradjian said he examined the blast site and described it as \"something you'd see when lightning hits the beach. There's definitely something that happened there.\"

He said the woman was sitting between the high and low tide water lines.

\"The person was sitting in a chair up against the breakwater at the tide line,\" he said. \"The sand directly in front of her basically erupted. They heard a loud noise. Weren't sure exactly what it was. A force ultimately pushed this person up against the rocks and then forward and falling into the sand.\"

Heavy equipment was brought in to preserve the sand at the blast site for investigators before the tide rose, he said.