Rev. Jesse Jackson compared Dontre Hamilton case to that of Emmett Till 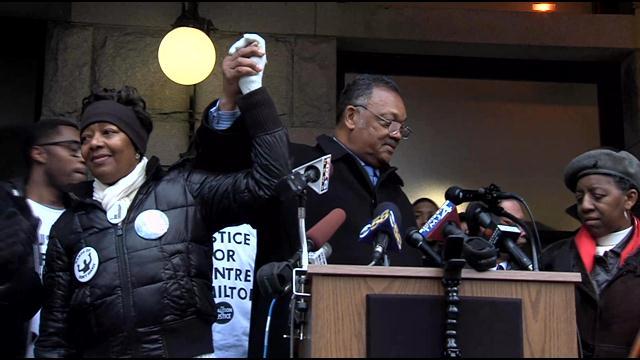 The Reverend Jesse Jackson attended a rally in Milwaukee Friday.

The event was organized with his Rainbow Push Coalition and the Coalition for Justice which had been marching on behalf of Dontre Hamilton, the man who was shot and killed during a struggle with a Milwaukee Police Officer in Red Arrow Park.

He told a large crowd that marched from Red Arrow Park to the federal courthouse that the Hamilton family is much like that of the mother of Emmett Till in that she never stopped pushing for accountability in her son's death.

Till's murder when he was just 14 for allegedly whistling at a white woman became a symbol of the disparity of justice for blacks in the South before the Civil Rights Act.

Jackson also offered some statistics that he says show a worrisome state of race relations in Milwaukee.

Among the statistics he cited: Milwaukee has the widest gap in test scores between black and white.

Milwaukee is the most segregated in housing because of poverty.

Milwaukee has the worst incarceration rate of black man, twice the national average.

Milwaukee has the second highest black poverty rate in nation.

Milwaukee Police warned of sporadic and periodic street closures in downtown Friday afternoon as protesters marched between Red Arrow Park, the Federal courthouse, and then made their way to a church at 4960 N. 18th Street.

Milwaukee County District Attorney John Chisolm announced in late December that the evidence showed Officer Christopher Manney was acting in self defense when he shot Hamilton 14 times back in April.

Among the evidence, Hamilton's DNA on the short end of the officer's baton.

The U.S. Attorney has agreed to open federal civil rights investigation into the case.

Jonathan Safran, the attorney who won a settlement for Frank Jude Junior after he was beaten by off duty police at a Bay View house party about ten years ago, says there needs to be a closer examination of police patterns and practices when it comes to the minority community.

Curtis Sailes of the Coalition for Justice said if they can get a federal prosecution in the Hamilton case, they are hopeful that other local cases will be reopened.

He named the homicide of Corey Stingley in particular. Stingley was the 16 year old who died while being restrained by customers at a West Allis convenience store when he was caught taking some small liquor bottles.

The D.A. determined the customers had no intent to harm the unarmed teen.