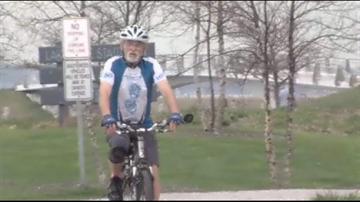 MILWAUKEE-This will be number 34 for Donald Brick and the UPAF Ride for the Arts.

\"I rode in the ride before it was officially a performing arts ride,\" Brick tells CBS 58 News. \"It was called arts peddlers.\"

Brick has been doing long distance cycling for awhile now and this Sunday will take the middle of the road journey, a 25 mile trek that includes going over the Hoan Bridge.

\"It's a fairly easy incline,\" explained the retired pipe fitter. \"Almost anybody should be able to make it.\"

No reason to be intimidated if your a weekend warrior. There's a 5 or 15 mile trek  for you.

Those who really want to challenge can pick the 66 mile trek that takes you the Ozaukee Interurban Trail and Grafton.

The only real numbers that matter are the donations.

Since 1981 some 8 million dollars generated so various  groups can take  fine arts to everyone in the community.

And everyone's invited to the post ride part on the Summerfest Grounds.

If you do go either to ride or cheer be sure to give Donald a big wave. He's 78 years young!

You can also register on the same day at the south gate of the Summerfest grounds.