Retired admiral on "most shocking call" of his life 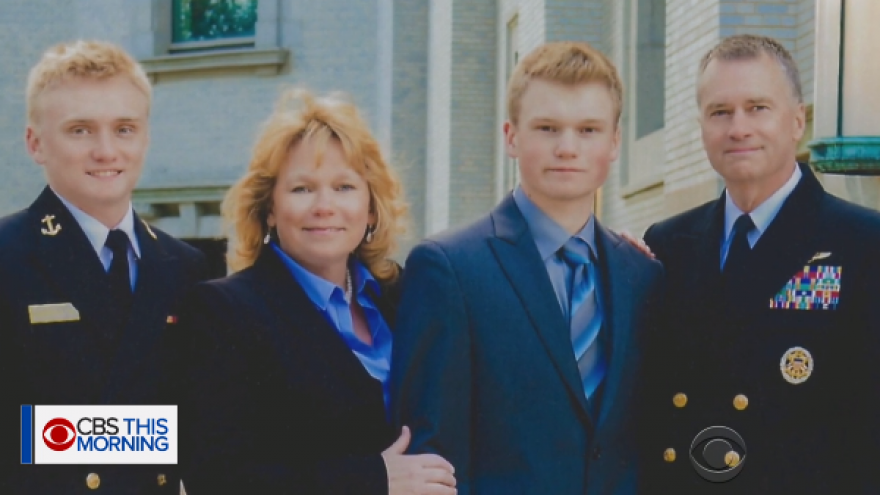 (CBS) -- In our ongoing series Issues That Matter, we're taking a closer look at the opioid epidemic, which has taken more than half a million lives since the year 2000.

For retired Navy Adm. Sandy Winnefeld, the epidemic is personal. Three days after he and his wife dropped their 19-year-old son, Jonathan, off at the University of Denver in September, Winnefeld received a phone call.

"The worst, most shocking call of my life," Winnefeld said Wednesday on "CBS This Morning."

Jonathan died from an overdose from a fentanyl-laced batch of heroin. His son had struggled with addiction for several years, but Winnefeld said he had been on the road to recovery – "bright-eyed, bushy-tailed" – after undergoing 15 months of inpatient treatment programs.

"We thought he was on such an upward trajectory. He was really excited to be at school, excited to be having his emergency medical technician qualification. And it fooled us. It really fooled us," the CBS News military and homeland security analyst said.

Jonathan grew up with anxiety, Winnefeld said, which was misdiagnosed as attention deficit disorder.

"He was prescribed Adderall, which was exactly the wrong thing to do and that started him down the road to self-medication," Winnefeld said.

In an Atlantic article titled "No Family is Safe from This Epidemic," Winnefeld wrote: "He began by sneaking a bit of alcohol at night in order to bring himself down from the Adderall a doctor had prescribed him, based on a misdiagnosis of attention deficit disorder. By eighth grade, he was consuming alcohol in larger quantities, and beginning to self-medicate with marijuana. Next came Xanax, and eventually, heroin."

Winnefeld also said it was difficult to find a treatment center for his son.

"There are a host of treatment centers all over the country. They all do different things. They are all maybe specialized in one particular thing. The hardest thing for us was to find a place that would treat the dual diagnosis of anxiety, some kind of mental illness, and addiction. Those are two things that have to be treated together very carefully. Not every facility does that, and unfortunately in our case, the military medical system wouldn't pay for that," Winnefeld said.

"One, cost. There's tremendous medical costs associated with this. There's tremendous loss of productivity in the workplace," Winnefeld said. "The original estimate was around $78 billion a year cost to the United States. The White House just recently revised that to over $500 billion a year. That sounds to me like it's more than a public health emergency. It's actually a national emergency, and so I think it's something that is really a national emergency and needs to be treated as such, needs to be funded as such, and we need to have some very thoughtful approaches to how we tackle the problem, all of which are very inter-related. You can't do one without the other or you fail."

The Winnefeld family is now dedicating themselves to studying the problem and saving other families from the same heartache. They launched a website called SafeProject.us to help address the issue.

"This runs the gamut, rich, poor, black, white, male, female, young, old. It's impacting every element of our society, and I think the public is beginning to become aware that there is an epidemic," Winnefeld said.