Residents Being Evacuated as Almost 100 Wildfires Burn in Florida 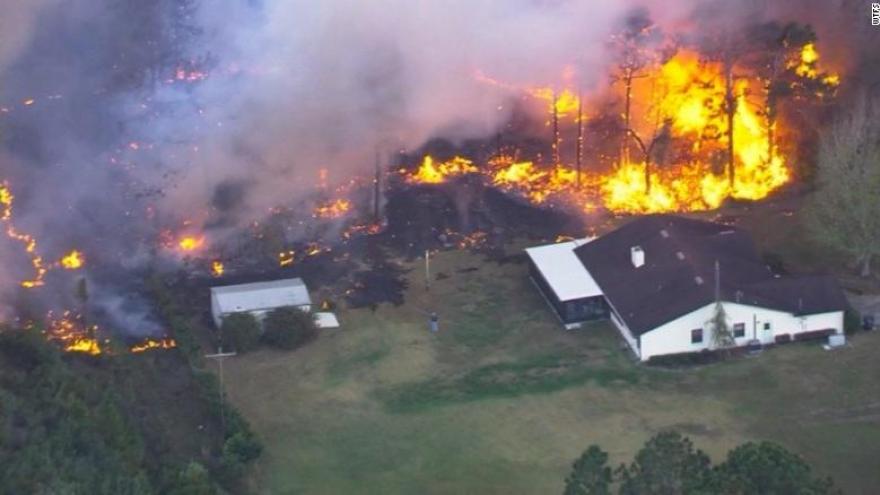 Thousands of homes have been evacuated as firefighters continue to battle 91 wildfires across Florida, the state's forest service said.

Since Thursday, more than 25,000 acres have burned in the state, Florida Forest Service spokesman Joe Zwierzchowski told CNN on Friday.

\"The state is really dry. Thank God we have the firefighters we have all around the state,\" Florida Governor Rick Scott told reporters.

Out of the 91 wildfires, two fires caused the evacuation of thousands of homes in central and southwest Florida.

A fire in the Golden Gates Estates section of Naples grew to 4,800 acres and destroyed nine homes, he added.

An additional 5,000 homes were in a voluntary evacuation order, officials said.

On Friday, the governor deployed the state's National Guard, including five UH-60 Blackhawk helicopters to help firefighters mitigate the massive wildfire, which started on Thursday.

The fire was 10% contained by Friday, officials said.

About 800 homes were evacuated in Indian Lake Estates, a golf and fishing community near Lakeland, state officials said.

The fire had burned about 600 acres and destroyed several structures by Friday night. Firefighters were still battling the wildfire early Saturday.

Local officials didn't have an estimate of the fire's containment Friday and said it was too early to tell whether any homes have been lost to the fire.

\"We know people have pets at home. We know there's a lot of valuable property inside the homes,\" said Kevin Walter with the Polk County Fire Rescue. \"The thing that will help our firefighters do their job is staying out of this area. That's the main thing that needs to happen right now.\"

The fire is the latest in \"a series of suspicious fires here in the last two or three weeks,\" County Sheriff Grady Judd told reporters in a news conference.

Authorities have not determined what caused the fire but they are offering a $5,000 reward for information about how the fire started.

\"If someone is setting these fires, we will find out who they are, and we will put them in jail. That's a promise,\" Judd says.

The number of arson wildfires across the state is up nearly 70% compared to this time last year, the Florida Forest Service said.

The area is no stranger to threatening wildfires. Firefighters managed to contain a fire in February that burned 4,000 acres, a fire official at the time said was the worst they'd ever seen, according to CNN affiliate WFLA.