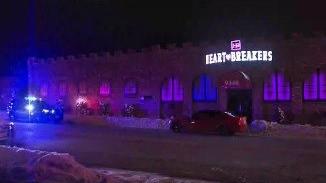 West Allis Police Department responded to a report of a firearm being discharged at Heartbreakers Gentlemen's Club at 3:42 AM on New Years Day.

The club was located at 9442 West National Avenue.

Preliminary investigation indicates a patron inside of the business fired at least one gunshot while inside the business.

The suspect was disarmed by business employees and ultimately arrested by West Allis Police Officers.

The person arrested is a 33-year-old male from Milwaukee. The male allegedly received injuries while being detained by business employees.

Police said they are unaware of any other persons during the incident being injured.

It does not appear any person was struck by gunfire.

The circumstances surrounding the entire incident are under investigation.

ORIGINAL 5:27 AM: A New Year’s celebration was disrupted by the reports of shots fired at a gentleman’s club in West Allis this morning.  Around 3:45, police received a report of gunshots in Heart Breakers.   Police squads from West Allis, West Milwaukee, New Berlin and Brookfield were dispatched to the night club  near 95th and W National Ave.  At least one man was observed being treated for what appeared to be a facial wound.  The circumstances surrounding the incident are being investigated.