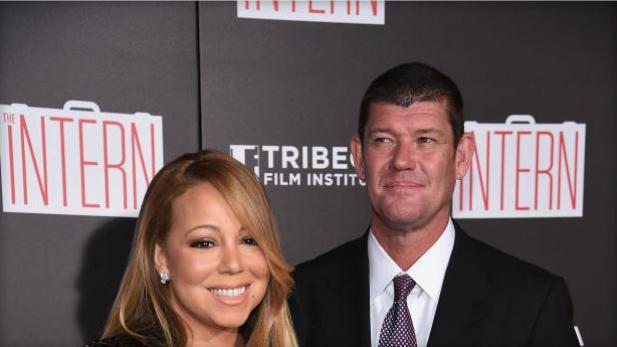 (CBSNews) James Packer put a ring on it, and now, Mariah Carey plans to keep it.

After the two called it quits last week, ET has learned that the “#Beautiful” singer wants to keep the 35-carat engagement ring her billionaire fiancé gave her when he proposed back in January.

According to a source, the two are “currently in discussions” on how they’re going to move forward with the breakup, but Carey “is keeping the ring.”

Carey, 46, was most recently spotted wearing the $10 million bling, which was custom designed by New York based designer Wilfredo Rosado, while taking her 5-year-old twins, Monroe and Moroccan, to Jessica Biel’s restaurant, Au Fudge, last Sunday. During the outing, she had switched the massive sparkler from her left to right hand.

One night earlier, however, she wasn’t wearing the ring at all while enjoying a dinner with pals at celeb hot spot Catch LA.

The source also revealed that Packer and Carey are “discussing the house” in Calabasas, California. After Packer asked her to leave the rental home, Carey was initially forced to live at the Beverly Hills Hotel for a couple of weeks. This was “completely out of character” for the 49-year-old Australian businessman, the source added. ET confirmed in January that Carey and Packer were paying around $250,000 a month (or $3 million a year) on the lease for the 18,000 square-foot mansion.

As for reports that Carey’s manager and friend, Stella Bulochnikov, is the reason for the split? The source tells ET that is simply not true. “James never had issues with Stella. Stella really cared for James,” the source explained. “She always had his best interest at heart. They were really close, like one big traveling family. The break up was for other reasons.”

Carey threw her own shade at Australian tabloid Woman’s DayWoman’s Day via Instagram on Sunday, seemingly slamming their latest report about Bulochnikov. She posted a selfie of the two and captioned it, “#realfriends who don’t read Woman’s Day #wedontknowyou. We love you #Australianlambs.”

Other reports claim that Packer left Carey after he discovered she was cheating on him with her longtime backup dancer, Bryan Tanaka. The source tells ET that is also not true.

“She is not into him in that way,” the source said, confirming Carey and Tanaka are not dating and have been close pals for a while. “But he’s fun and great company.” Earlier this week, an additional source confirmed the reports were untrue, telling ET, “[Bryan] is not a reason for any issues between Mariah and James. It’s no secret that Mariah loves having a big entourage around.”

ET has confirmed that Carey and Packer split following a fight they had during their vacation in Greece in September. “They were so happy,” the source said of Carey and Packer’s romance on Tuesday. “Mariah was a source of love for James.”

Since then, things haven’t been easy for Carey, despite her recent outings. According to a report from E! News, Carey was forced to cancel three Latin America stops on her Sweet Sweet Fantasy Tour last week, citing promoter negligence. She’s still scheduled to perform in Mexico City and Monterrey later this month, however.

Carey canceled the shows because she was “emotionally distressed” by the sudden change and breakdown of her relationship with Packer, the source confirmed to ET, also revealing that Packer and Carey haven’t spoken since their vacation.

Carey was actually “blindsided,” the source added, when news broke of her split. She had intended to release a joint statement with Packer, and maintain an amicable relationship with her now ex.