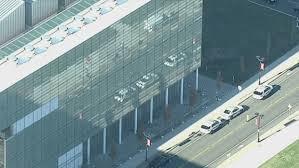 (CBSNews) PISCATAWAY, N.J. -- A suspect is in custody after five people were stabbed at the Rutgers Business School in New Jersey, reports CBS New York.

Around 2:45 p.m., the school issued a tweet telling students to avoid the area and/or take shelter, then about 45 minutes later the school tweeted “Actor in custody. Area is safe. Police investigation ongoing.”

The Rutgers Business School is in Piscataway, N.J. The school also has campus buildings in New Brunswick.