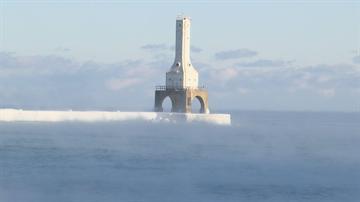 \"This is a huge part of the fabric of the city,\" Mayor Tom Mlada said.

The U.S. Army Corps of Engineers built the breakwater in the 1930s.  But by last June, it was too dangerous for people to use.

\"If this disappears tomorrow, the impact would be significant,\" Mlada said.

Mlada went to Washington to lobby for money to fix the breakwater.  He  didn't have much luck, hearing there wasn't enough federal money to help.  That changed Tuesday.

\"Really our thought was, we're going to have to look ahead to fiscal year 2015,\" Mlada said.  \"So when the congressman called he was very excited.\"

\"We've been telling the Corps if they didn't come do work sooner, it was going to be more expensive later,\" Congressman Tom Petri (R - 6th District) said.

Congressman Petri's district includes Port Washington.  He met with the Corps Tuesday and found out nearly $1 million would be available for the breakwater.

\"When they announced it, I said 'Stand up,' and I gave [the commander] a big hug,\" Petri said.  \"He seemed a little taken aback, but it really was a  pleasant surprise.\"

But this isn't a complete fix, only more of a band-aid.  The entire project will take around $16 million to complete.  The city may need  to look for state and local funds to help finish the work, but this is a start.

\"We're looking forward to taking down some of the signs that were up to tell people they couldn't go out and use part of the port for fishing and that sort of thing,\" Petri said.  \"Getting back to normal and eventually get the whole thing fixed up.\"

\"We want to ensure that while this initial appropriation, it's very generous and unexpected and again, we're very, very  grateful,  the reality is we need a long term, sustainable solution,\" Mlada said.

Work on the $950,000 first phase will begin this spring and continue into this summer.