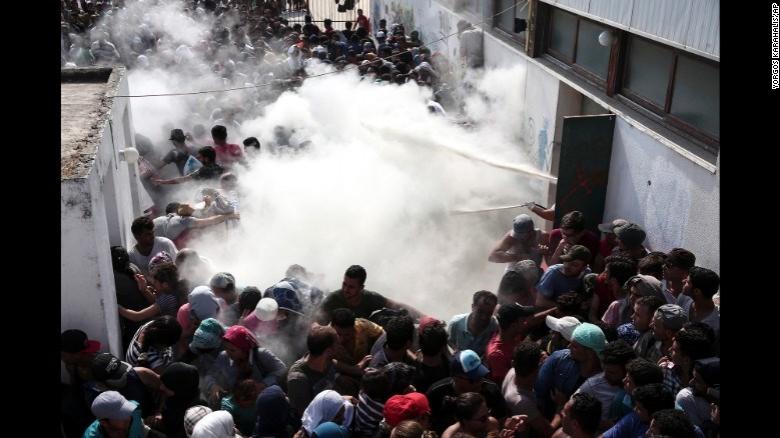 (CNN) Hungarian riot police used tear gas and water cannons on migrants at the country's border with Serbia on Wednesday after a group broke through a barrier in an attempt to enter the European Union.

Crowds of desperate migrants, most fleeing violence in the Middle East, were left stranded in Serbia after Hungary sealed the final hole in the border between the two countries Tuesday, closing a popular migration route to Western Europe.

Earlier Wednesday, huddled next to the razor-wire fence blocking Hungary from Serbia, battle-worn migrants had begged for sympathy.

"Open the door!" they chanted, many having traveled thousands of miles carrying all the belongings they had.

A young Iraqi man from Karbala in a soccer jersey waited next to the fence with no intention to move.

"We'll wait here for six years if we have to," he said. "We have nothing left to lose."

A Syrian refugee from Aleppo said he couldn't understand why Hungary wouldn't let them through.

"We want to pass to Germany, Austria, Hungary, Denmark," the man said, his words aimed at the Hungarian Prime Minister. "No one wants to stay in your country."

In a tweet, Croatian Prime Minister Zoran Milanovic said his country was "ready to accept people."

"It doesn't matter what religion or nationality they are or the country where they would like to go to," read the tweet.

"These people are here, they want to work, to create. They don't want to come to Croatia nor Hungary, but they will be able to pass through Croatia."

The Croatian government said it has been preparing for refugees for weeks, even conducting simulations on how to handle thousands of people.

Milanovic, who is set to meet Thursday with Austrian Chancellor Werner Faymann to discuss a response to the unfolding crisis, also had harsh words for the Hungarian government and its blockage of migrants:

"I believe the policy in Budapest of raising walls is dangerous and cruel," he said, according to the Croatian government's tweet. "Wire in Europe in the 21st century isn't the answer but rather a threat."

Following the closure of the border with Hungary, throngs of refugees in Serbia are heading for Croatia, in the west, as an alternative route into Western Europe.

The migrants, who were intercepted near Tovarnik, by the Serbian border, were taken to a registration center outside Zagreb, where they could receive treatment and assistance from agencies.

The danger of landmines

Migrants who survived the perilous journey across the Mediterranean Sea could face another danger: landmines.

Medecins Sans Frontieres, one of the aid groups assisting with the refugee crisis, warned about the presence of Balkan landmines.

The Croatian Mine Action Centre estimates about 51,000 mines are still buried as remnants of the Balkan Wars in the wake of Yugoslavia's collapse in the 1990s.

But the Croatian government said minefields are clearly marked with large signs.

Some of those landmines are close to the Serbian border -- where many of the incoming migrants would be entering.

Hrvoje Debac, an adviser with Croatia's Office for Mine Action, said the office urges people to stay by the roads and not venture into the woodlands.

Some trains headed from Salzburg, Austria, to Germany have been stopped by the German Federal Police, the German train authority Deutsche Bahn said Wednesday.

Deutsche Bahn said it was waiting for clearance to allow a few trains to move again.

It was not immediately clear why German authorities stopped the trains, but the order came a day after 180 people jumped off a train.

Someone used the emergency brake to slow down the train before the people jumped off, Deutsche Bahn said.

With the world facing its biggest migrant crisis since World War II, Google announced it will match the first $5.5 million donated globally to help migrants, up to a combined $11 million.

The tech giant said the funds will go to Network for Good, which will then distribute the money as needed to Doctors Without Borders, the International Rescue Committee, Save the Children and the U.N. refugee agency.

More than 430,000 migrants have fled to Europe so far this year, the International Organization for Migration said. Many are escaping warfare, terrorism and poverty from countries such as Syria, Iraq, Afghanistan and Eritrea.

Migrants typically cross the Mediterranean and try to go through Greece, Macedonia, Serbia, Hungary and Austria before finally reaching Germany or other European countries known to be welcoming to refugees.

The European Union is still trying to figure out how to distribute 160,000 migrants -- and whether to set quotas for member countries to absorb them.

That number includes 40,000 from Italy and Greece that the EU had already agreed to relocate. Another 120,000 need placement.