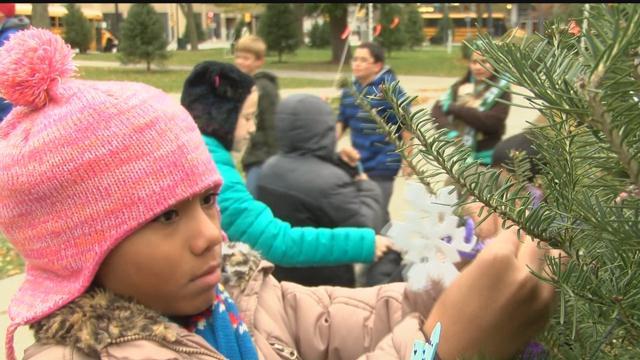 He was there to offer encouragement and some candy to the dozens of school students who brought their homemade decorations for the Christmas trees.

For more than a decade, the City of Milwaukee has sent out invitations to area schools.

70 are participating this year. That's a record breaker.

"Every year more and more schools want to come on board," Public Service Ambassador Tammy Johnson told CBS 58 News. "It's organized chaos. But a lot of fun."

Cathedral Square one of several parks throughout Milwaukee that will be decorated and lit with all the imagery of the season you'd expect.

The hand crafted ornaments here are the most endearing.

A reminder of what this time of year looks like through the eyes of a child.

"They get to make their own ornaments," explained Johnson. "They get to put them on the tree. I think it gets them ready for the holidays. It gets them so excited."

There was also free hot chocolate and cookies for the kids who spontaneously broke out singing "Jingle Bells" for the CBS 58 News cameras.

Some of the kids were new to this, but quickly caught on and enjoyed being out and about and just being themselves.

You get the sense that no matter what your beliefs, there was still great comfort in joining as a community to be part of something special.

As Ambassador Johnson summed it up: "I'm still a believer of Santa in my heart!"