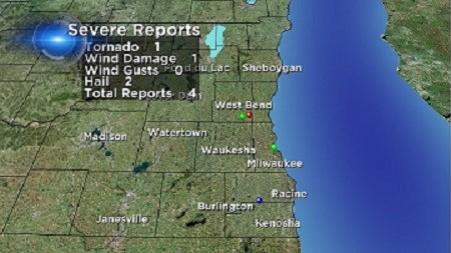 Several severe storms developed late Monday morning and continued through mid afternoon across Southeast Wisconsin.  These storms developed in a warm and very humid air mass.  In Milwaukee, the high temp hit 80°, but our dew points were holding in the upper 60's to near 70° creating heat indices in the mid 80's.  At the surface a weak cool worked west to east across the area while a disturbance aloft also increased instability.

These ingredients helped generate large hail, heavy rain, frequent lightning and wind gusts near 50 mph.  And in one case, a weak tornado just northeast of Germantown.  This tornado, rated an EF0, touch downed shortly after 2pm and was on the ground for a couple of minutes before dissipating.  There were no reports of injuries or damage to building structures.   The locations of severe weather reports can be found on the map below... the red dot indicating the location of the tornado.

The green dots represent large hail reports.  The report just south of West Bend was for golf ball sized hail (1.75\" diameter) also near Germantown.  At 12:15 PM an observer reported hail the size of a quarter (1\" diameter) near South Shore Park in the Bay View neighborhood.  At about the same time wind gusts at Mitchell International Airport hit 44 mph.

The storms continued doing damage as they worked south.  By 3:55 PM Racine County law enforcement reported trees and power poles down in the union grove area (blue dot).  This was caused by strong straight line winds rushing down from the thunderstorm... something known as a microburst.

Thankfully, we get to enjoy a nice quiet stretch of weather for the next couple of days.  Our next chance for thunderstorms arrives Friday.