Rare January Hurricane in the Atlantic 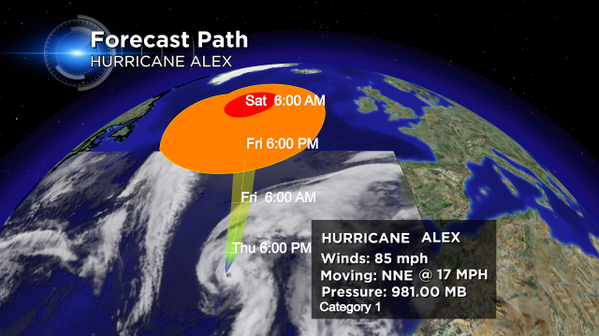 The recent hurricane season was a bit unusual, when you think back to the more active Pacific tropical storm season. Well this year is also starting out on a rare note as the first Hurricane of the year is already brewing. An unusual January Hurricane is now tracking through the north central Atlantic Ocean. This is tropical development we haven't seen in this month since 1938. But in a little more recent history Alice was still around into January, back in 1955.  Either way, it's a tropical storm we haven't had in the month of January in over sixty years. But with the strong El Nino and the mild weather we've had (for the most part) so far this winter, it may not come as that much of a surprise.

Here's the details... Early this morning Alex strengthened to a Category 1 Hurricane with sustained winds at 85 mph. Alex is forging north at 17 mph, with an uptick in forward speed expected today. On this track it will impact the Azores by Friday morning, where Tropical Storm Warning and Hurricane Warnings are now in place.  A Hurricane Warning is in effect for the central Azores and A Tropical Storm Warning is in effect for areas like Santa Maria in the eastern Azores.  And you can see the distinct eye of the storm below: 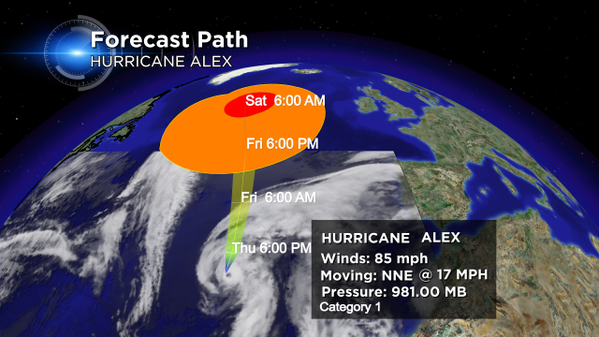 The eye is embedded within a fairly symmetric mass of deep convection. Water vapor imagery shows that the upper-level trough is now west of the cyclone, with divergent flow over the center - indicative of a tropical transition as reported by the National Hurricane Center. Generally, it's quite unusual to stir up a hurricane over waters that are near seventy degrees, but the temps in the upper part of the troposphere are significantly colder than the tropical norm. The resulting instability is likely the main trigger of the tropical transition and intensification of now Hurricane Alex. The good news for folks in that area is that only slight intensification is expected as the storm continues to pass over cold waters during the next day or two. Forecast data suggests that within two days the storm will decay to extra-tropical status as it begins to merge with a large low pressure area. However, the storm still poses a threat in the short term. Hurricane force winds extend outward up to 25 miles from the center and tropical storm force winds extend outward up to 150 miles. Tropical storm force winds are expected to begin over portions of the Azores tonight. Hurricane conditions are expected to spread over the central Azores by early Friday. Alex is expected to produce rainfall of 3 to 5 inches over the Azores through Friday, with isolated amounts of 7 inches. As a result, flash floods and mud slides are possible along with storm surge itself to produce significant coastal flooding near and to the east of the center of Alex. Near the coast, the surge will be accompanied by large and destructive waves.

As a reminder you can track not only local or national weather but also Tropical Weather on our CBS58 Weather App. Here's a screen shot I took which shows that you can click on each dot for information on Alex. Just click on what looks like a stack of papers just to the right of the time. That brings you to "Map Settings" and from there you can choose any number of weather overlays. 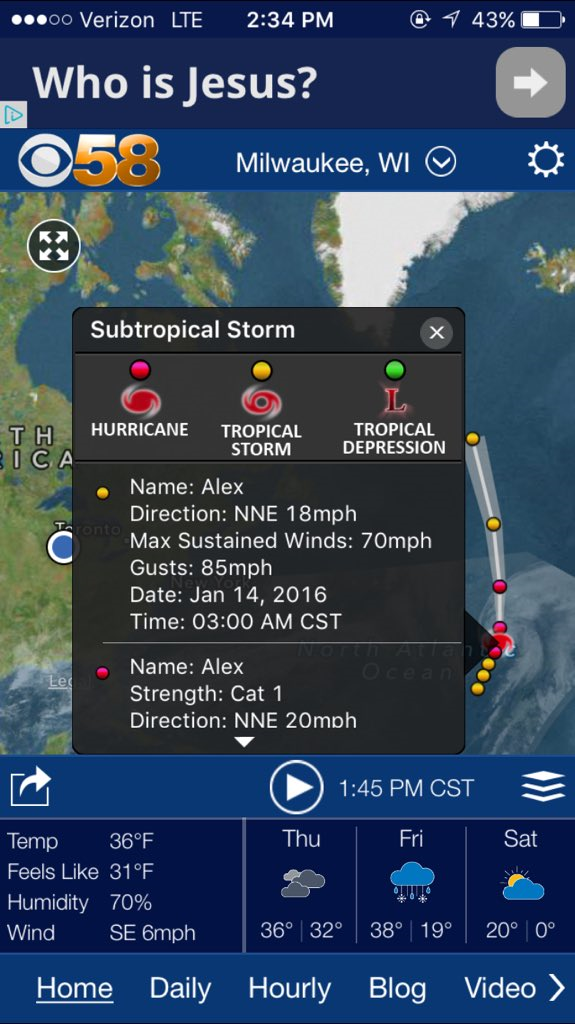