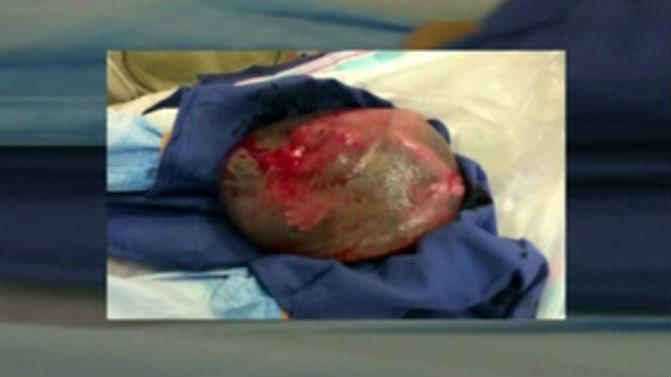 We all know that every baby is special, but Silas Philips pulled off a rare feat right out of the womb.

Days before he's scheduled to leave the hospital, he's already gone viral on social media because he was born 'en caul.'

Silas was completely encased in his amniotic sac, said Cedars-Sinai Medical Center in a Facebook post. That's so rare, that even doctors delivering babies hardly see it. So Silas' doctor snapped a photo with his cell phone.

It looked like the baby was trapped in a big water bubble.

\"Even though it's a cliche -- we caught our breath,\" neonatologist William Binder told CNN affiliate KCAL. \"It really felt like a moment of awe.\"

Then Binder got to work helping Silas to breathe - and giving him special care, because Silas was born three months before his due date via Caesarean section.

\"It was definitely like a clear film, where you could definitely make out his head and his hair,\" Philips told the affiliate. Silas was curled up in fetal position inside.

What is 'en caul'

The amniotic sac is an opaque bubble that covers all babies in the womb from right after conception. As the baby grows, it fills with fluid, including the baby's urine.

The sac cushions the baby from bumps and jostles during mom's daily ups and downs.

Normally, during a birth, it breaks, and the fluid rushes out, which is where the term 'breaking water' comes from.

But sometimes, the sac can get stuck around part of the baby, according to Dr. Amos Grunebaum, an obstetrician and gynecologist, who publishes a website on birth and baby care.

It can, for example, get stuck on the baby's head, which makes it look like its wearing a glass space helmet. That's also where the term caul comes from -- it derives from Latin words that refer to a helmet.

Such amniotic sac helmet births are rare enough, but to have the entire baby inside the sac, or 'en caul,' occurs in less than one in 80,000 births, Cedars-Sinai said.

When Philips heard how rare her Baby's birth was, she was flabbergasted. \"I was like, oh my gosh, Silas, you're a little special baby,\" she told KCAL.

It's particularly surprising in a C-section, because the scalpel usually pierces the amniotic sac.

The doctors must have missed Silas's.
Share this article: