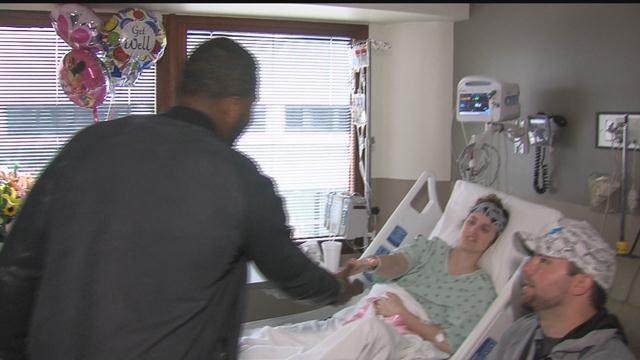 Clair Verstegen is a dedicated mother to her 11-month-old daughter, Brielle.

"She's been through a lot of stuff in her not even year old life," she said.

"If I could hold the key to her health, I couldn't look at her and see her struggle," she said.

That's why the 28-year-old didn't hesitate to be the donor, but it took months and multiple failed attempts before it could happen.

"We finally got her bigger a little bit so she could receive mine," said Verstegen.

Recovering in her hospital bed, she received well wishes from Packers star Randall Cobb, who commended her on her selfless sacrifice.

"That just shows the love of a mother to do anything to give her child life," said Cobb.

Cobb became an organ donor at the age of 16. For the last two years, he's teamed up with Froedtert Hospital, encouraging others to line up with him.

"Every second we have on this earth is valuable and if we can't be here, why not help someone else have that luxury of extending their life," he said.

The Packers fans proudly showed off post-transplant pictures of their daughter who now has a second chance, something thousands of others are still waiting for.

"It's amazing he's so passionate about bringing awareness to organ donation because I never realized how big it was until it affected my life," said Verstegen. "And how so many people say they're organ donors, but they're really not organ donors on their driver's license and it could make a huge difference."

Verstegen hopes to be released soon. She and her husband plan to stay at the Ronald McDonald House while their daughter continues to recover.

Click here to learn more about organ donation and the mission supported by Cobb.