Rally in support of local police near Mayfair Mall 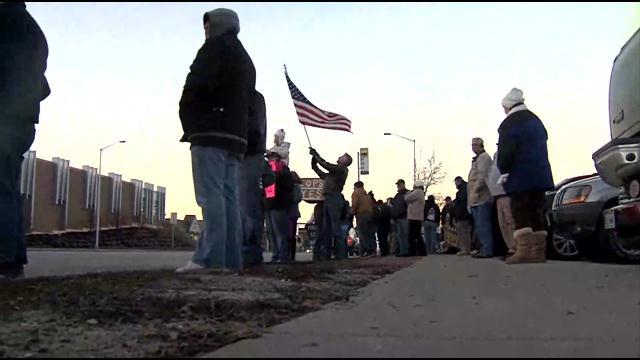 A rally to show support for police happened Thursday afternoon.

Supporters gathered along Highway 100 outside Mayfair Mall to show appreciation for those serving in the police force.

Brian Connolly from Wauwatosa organized the rally.  He says he's seen so much negativity about police lately, that he wanted to show support.  He says this isn't a protest, but more of a 'thank you'.  He says he has no problem with people protesting against police and police actions.

\"A lot of people don't really understand what their job entails, when they go out into the community, they don't know who they are going to be interacting with on a daily basis,\" Connolly said. \"They don't what's going to be happening when they step out of their car, so they have to prepare themselves every single day for the worst.\"

CBS 58'S  Priscilla Luong reports that counter demonstrators showed up, creating some tense moments with some shouting. At least one uniformed officer kept the group separated and there was no further outburst.

\"It was really disappointing to see how they came out here and behaved tonight,\" said County Supervisor Deanna Alexander who was part of the pro police rally.

Some of the protesters accused Alexanders of being racist for some tweets she sent out during the Dontre Hamilton protests. Hamilton was the man shot dead by a Milwaukee Police Officer during a scuffle in Red Arrow Park.

\"People in these groups are really the same people who've been sending me death threats,\" said Alexander Thursday night. \"Really just being rude to anyone that's willing to stand up for law enforcement.\"