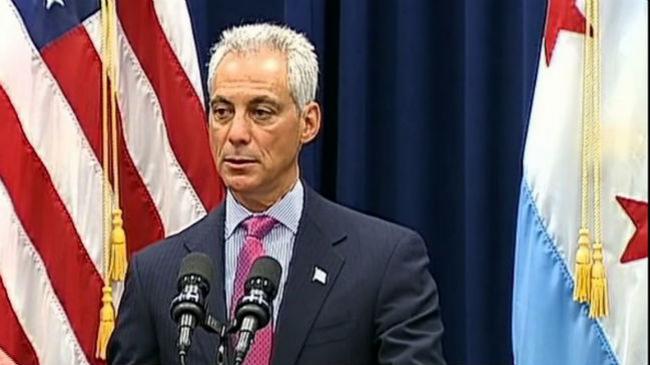 Washington (CNN) Chicago Mayor Rahm Emanuel is facing the toughest challenge of his four-year-old administration amid protests over the way his city responded when a white police officer shot a black teenager 16 times last year.

After video of the October 16, 2014, shooting of Laquan McDonald was released last week, Emanuel asked the city's police superintendent to resign Tuesday. Some activists and political opponents say that Emanuel, a three-term congressman and former chief of staff to President Barack Obama, should step down as well.

He insisted Wednesday he would not heed those calls.

"We have a process called the election," he said at an event sponsored by Politico. "The voters spoke. I'll be held accountable for the decisions and actions that I make."

That Emanuel -- who's been a high-profile Democratic political warrior for decades in Congress and in the White House -- is struggling so publicly is significant. His trademark brash attitude, which helped earn him his power and status, is running headlong into a national movement confronting police brutality and racial discrimination.

For a politician who's had a habit of making enemies throughout his career, Emanuel is now trying to make amends.

"I don't think this is the end of the problem," he said Tuesday, after announcing a task force on police accountability. "I think this is beginning of the solution. And we're going to work through this on a consistent basis to make the changes."

That's not enough for some Chicago activists -- as well as some high-profile national voices. When asked by CNN's Don Lemon on Tuesday whether he should go, movie director Spike Lee said, "I think so."

"They're calling for Rahm's neck too, his head," Lee said. "A lot of questions have to be answered. Who made the decision? Why was this tape was held for so long? And who saw the tape?"

Lee premiered his movie, "Chi-Raq" in Chicago on Tuesday evening, a film based in the Windy City and focusing on its gun violence.

Lee premiered his movie, "Chi-Raq" in Chicago on Tuesday evening, a film based in the Windy City and focusing on its gun violence.

Johnetta Elzie, an activist affiliated with Campaign Zero, an organization aiming to end police violence, tweeted that Emanuel is part of the problem.

"By these standards @RahmEmanuel, you should be dismissed as well," she tweeted Tuesday.