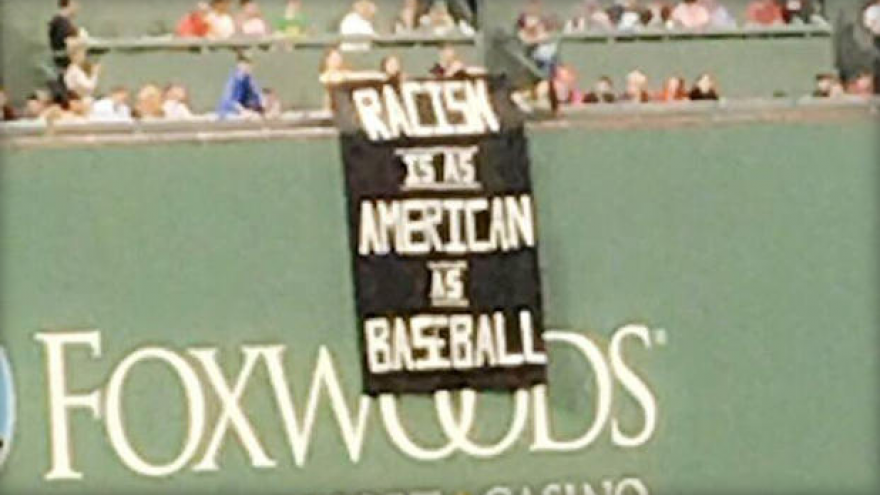 BOSTON -- Some fans seated above the Green Monster hung a sign about racism in the fourth inning and were escorted from Fenway Park during Boston's 7-3 loss to Oakland on Wednesday night.

The sign had a black background with white letters that read: "Racism is as American as Baseball," CBS Boston reports.

It was up on the left field wall for about one batter until umpires asked it be removed because it was in fair territory. There was a spattering of boos from the crowd as Red Sox security forced them to remove it and escorted the people from their seats. A Red Sox spokesman said four people were escorted from the park and one said they were inspired by Black Lives Matter.

"Saw it was draped over the Monster," Red Sox manager John Farrell said. "From the dugout, you see someone expressing their opinion and it looked like it was withdrawn relatively quick."

"There's no place for that," Betts said. "That's for another day, though."

It's not the first time that the Red Sox have responded to the topic of racism at the ballpark.

Earlier this season, Orioles center fielder Adam Jones said after a game on May 1 that he was the victim of racial slurs and had peanuts thrown at him during the game.

The next day, Jones received a personal apology from Boston team president Sam Kennedy on behalf of the club. When he stepped up for his first at-bat of the game, he was given extended applause from the Fenway crowd.

Red Sox pitcher Chris Sale stepped off the mound to allow the applause to continue.

"Just appreciative that action was taken and not everybody feels the same way as selected people," Jones said. "Sale, who works extremely fast, took his time and let it relish a little bit, so I appreciate the sentiments," Jones said after Boston won 5-2.

In August, owner John Henry said his team will lead the effort to change the name of Yawkey Way. The street is currently named after Tom Yawkey, who owned the team from 1933-76 but refused to integrate the team from 1947-59.