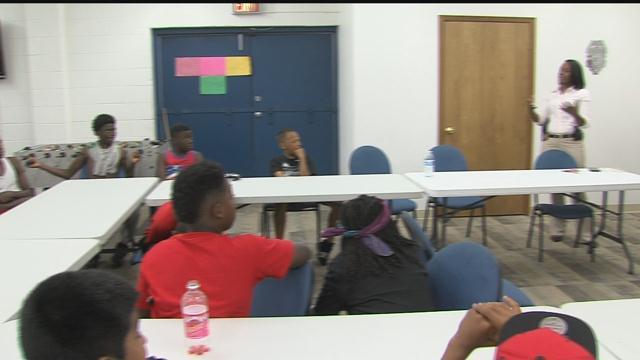 Injustice in the black community has taught Elijah Girley a harsh, but real lesson of survival.

"Do not reach down into your pockets because they might think you're getting a weapon," he said.

It's also caused the 10-year-old from Racine to see police officers through a different lens.

Girley said some officers are bad, but some are good too, like Racine Officer Bryant Petersen.

Deterring crime and building trust is Petersen's job as a community policing officer in Racine's 16th Street neighborhood. But, he can only teach so much about how young black boys should interact with police.

"I'm a white officer so I can only give them advice coming from a police officer standpoint," said Petersen.

"We have to know how to contain our attitude when we're speaking to the police," said Dyland Weather of Racine.

At their weekly meeting Tuesday, kids apart of the Safe Haven Guys Group had a forum with community members they can relate to, talking openly about police-involved homicides.

"I don't know what that officer did. I don't know if it was a mistake," said another officer in attendance. "What I do know is when you see it played out on tape it looks very bad and we hope the justice system gets it right."

But instead of counting on the justice system, the hope is that youth, adults and police can work together to solve a nationwide crisis.

"It's bad on both sides," Weather said. "I don't want anyone shot or killed."

Community members said the discussion for change goes beyond youth and police officers. They're planning a town hall meeting to include parents, so they know how to address tough social issues with their kids.