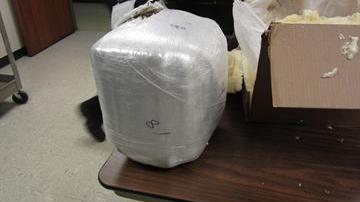 RACINE- Deputies in Racine made another large scale drug bust.

Last week they arrested a man for trafficking 210 grams of Heroin.

On Monday at 4:39 PM, initiated a traffic stop on a vehicle that was northbound on I-94.

The vehicle was stopped for speeding.

A Sheriff’s K-9 unit alerted on the vehicle and a subsequent search of the vehicle reveled 19 pounds of marijuana.

The street value of the marijuana is approximately $19000.

Sheriff’s Investigators learned the marijuana was being transported from Illinois to Milwaukee.

A male resident of Milwaukee was taken into custody for possession with intent to deliver marijuana.

His identity is being withheld pending further investigation.

In a seperate, smaller, siezure on Tuesday, the RCSO executed two NO KNOCK narcotics related search warrants at 103 and 109 Newman Road, in the Village of Mt. Pleasant.

Both residences were under the control of the same individual and are accessed by a common driveway.