Racine pushing to demolish apartments destroyed by arson in 2013 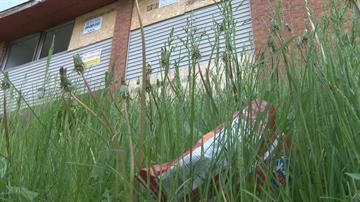 \"We've got people ready to make investments,\" DeHahn said.  \"But until this building's gone, it ain't gonna happen.\"

The building is a set of apartments on Jacato Drive, which were destroyed by fire January  23rd, 2013.  Inspectors quickly determined it was arson, but haven't caught anyone yet.  No one was hurt, but 20 people lost their homes, creating,  what DeHahn calls, an eyesore that needs to come down.

\"We're working on it, but it's very difficult because you have to go through the courts to get it accomplished when  the owner doesn't want to do anything,\" DeHahn said.

The city wants to replace the building with low-density housing, but can't because DeHahn says the owners won't cooperate.   That's left a building potentially ripe for drug dealers and animal infestation.

\"We have a community policing house right across the street there and there's a great community group that has  developed an advocacy center,\" Metoyer said.

That's allowed detectives to focus on catching the people responsible for setting the fire.

\"Pretty decent leads,\" Metoyer said.  \"We just need to get some additional information to tie it all together.  There are people  that know, we just really need them to come forward.\"

In the meantime, DeHahn looks forward to an upcoming court case with the owners that could finally bring out the wrecking ball.

\"I'm going to be there in court to hear what they got to say,\" DeHahn said.  \"Because it's important that we resolve this issue for  the community.  Otherwise it's not going to get better.\"

The city will take the owners to court in late June.  The ruling could also result in the city fining them $100,000.  If you have information about the person or people responsible for arson, you can call Racine Police investigators at 262-635-7756.