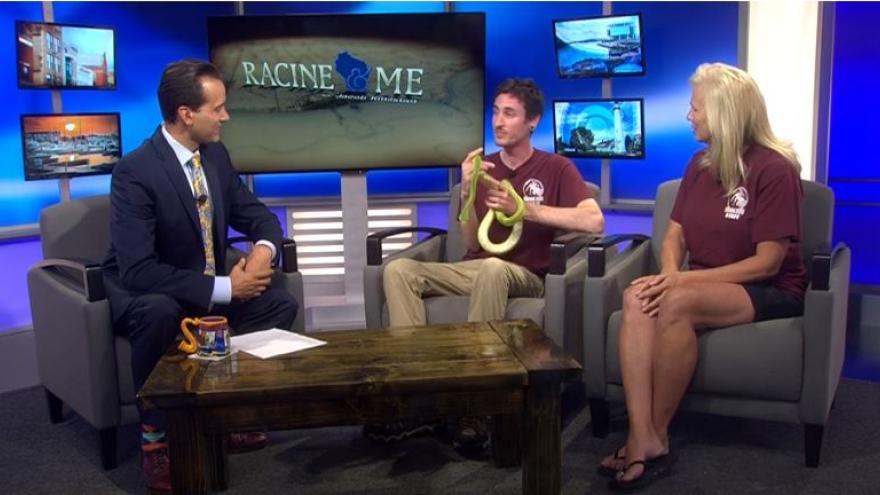 Jacob Kittilstad started the show by reminding viewers that words have meaning. He said not only should people think before they speak - listeners should also consider the source of the words they are hearing. He expressed his happiness in being able to bring people from our community to the screen to talk about events and issues affecting neighborhoods close to home. Then he welcomed his first guests.

The Tichigan Lake Lions Club Car Show is one week away and – again – they expect to raise tens of thousands of dollars for a local child with severe health issues. The money is raised by raffling off a newly assembled engine during one of Wisconsin's largest single day car show. Last year more than 1350 show-vehicles (in total worth about $75,000,000) were brought to the event. This year they hope to continue their expansion. Click here for more information

Historians and village officials in Elmwood Park recently broke ground on a new monument honoring the Taylor Orphan Asylum (later named the Taylor Children’s Home). Jacob was joined by two project committee member to talk about why the history is worth memorializing. Even though the words ‘orphanage’ and ‘asylum’ carry mostly negative connotations in literature and pop culture, children who stayed at the children’s home had generally positive experiences. Historians want that impact memorialized. Click here for more information

The Root River Festival is just around the bend and organizers want to make sure the public knows it is coming. Organizers say the event features canoeing, storytelling, music, and a long list of other events. They also note this is the celebration/fun component of their larger mission: setting and working toward goals for the Root River’s overall health. Click here for more information

And lastly, the Racine Zoo brings Hardy – a Green Tree Python – to the studio to help promote their upcoming events. The Racine Zoo is always busy, even as summer comes to a close. The day the program aired their Car, Truck & Bike Show happened at the zoo grounds. Then – mid-week – was the final concert in their Animal Crackers series. And staff also wanted people to know about their programming for children the following weekend: Zoorific Saturday. Click here for more information