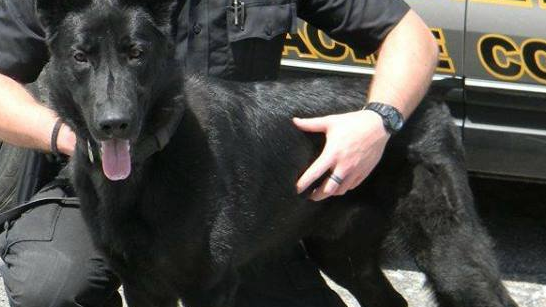 RACINE COUNTY - A Racine County Sheriff's Deputy was monitoring traffic on Durand Ave in the Town of Dover yesterday afternoon. K9 NOX started barking and that's when the deputy turned and saw a male walking at an extremely fast pace around the passenger side and front of the squad. Before the deputy could open his door, the subject was within inches of the driver's side door. The subject's lips were separated and he was baring and clinching his teeth.

The deputy then exited his squad and tried to talk with the subject who appeared intoxicated. The subject was hostile and refused to keep his hands out of his pockets. The incident was evolving so fast that the deputy was unable to close his squad door. He escorted the subject to the front of the squad and was getting ready to pat the subject down for weapons when the subject suddenly turned and pushed him in the chest. This caused the deputy to slip on the ice. He was able to grab a hold of the subject.

At this time, K9 NOX exited the still open driver's door of the squad and assisted his partner by biting the subject in the left wrist area. The subject was taken into custody a short time later.

The subject was later transported to a local hospital for treatment. He was then taken to the Racine County Jail where he was held on the charges of battery to an officer and resisting/obstructing.