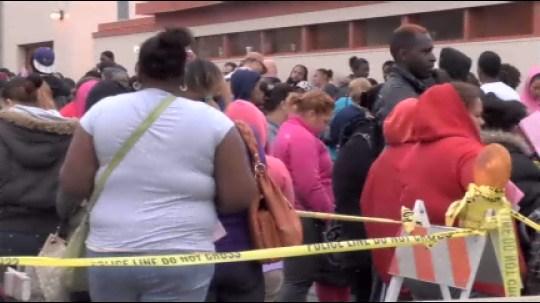 A large crowd gathered outside the Racine County Housing Authority as the agency began accepting rent assistance applications for the first time in 12 years. Many of those people began camping out the night before the housing authority began taking applications.

Pushing and shoving were seen as unorganized crowds waited outside the Racine County Housing Authority to apply for Section 8 Assistance. Police say the housing authority didn't plan for the huge crowds, and didn't make it clear where people needed to line up before it was too late.

Jacqueline Jackson showed up early at 5:00 a.m., but like many others waited in line on the wrong side of the building. \"They told us, the people on that side they weren't taking no applications, so we had to run around this side and come in this parking lot.\" Racine police tried to help direct and calm the crowd as they rushed to the north side of the building.

Audrey Beason says things weren't this bad the last time the Racine County Housing Authority accepted applications. She tells CBS 58 there are too many people from Chicago trying to sign up for federal assistance at Racine County.  Anyone who's eligible can apply anywhere for housing assistance, but if approved in Racine County, the assistance needs to be used in that county.

CBS 58 has found someone attempting to sell their Section 8 applications on Craigslist.

Housing Authority of Racine County Executive Director Linda Ring Weber says her teams had a plan in place, but never expected such a large crowd.

\"I had three men outside who actually worked with the crowd so that if somebody was disabled they could bring them in and have them wait inside,\" Weber said late Monday afternoon.  \"But I'm sure in th morning there were probably people that just didn't get the accommodations that they needed.  I am sorry about that.  I regret that.\"

The housing authority will accept applications through Friday, October 17th at noon.