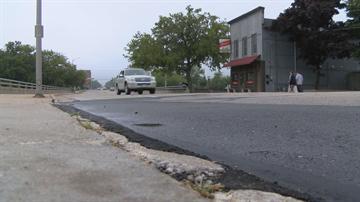 RACINE -- Three times a week, you'll find William Beyers working in the Racine County Workforce Development Center, but not at a job, instead working to find one.

The former machine operator lost his job about a year ago.  Ever since, he's come to the Workforce Development Center hoping for a chance, but that hasn't come.

\"Racine isn't a bad place, for now it's just a bad place for jobs,\" Beyers said.  \"I mean, it seems like everyone's leaving or closing down.\"

Beyers shouldn't feel alone.  At 11.3 percent, the City of Racine continues to hold a title it wish it didn't: highest unemployment in the state.

Mudnl sees hundreds of people come in looking for work daily.  Some, he's been able to help, like the center's latest class of CNC operators, which saw a two-in-three hire rate.  But many of the people looking for jobs find work outside city limits.

\"In the City of Racine, generally there's a lack of buildable land to build a large-scale facility,\" Mundl said.

\"We have, like the Jacobson property [on Memorial DeKoven in Racine], that's all open,\" DeHahn said.  \"It's ready for building.\"

The problem though, according to DeHahn, is companies don't have easy access to the freeway to get to Racine.

\"That's what's killing us,\" DeHahn said.  \"If we have access to the interstate, I think we'll see a rebound, but without that, it's going to be what it is.\"

DeHahn says the city is working to push for four-lane freeways on Highways 31 & 32 to lead industry and drivers into the city, but that process will take time.

\"You'd think it should go faster, because the end result is what you want and you've gotta wait to get it,\" DeHahn said.

The council president says he suggested the roadway idea about 20 years ago while he was a member of the Racine County Board, but it didn't go anywhere.  Now, DeHahn says the earliest anything could move ahead is 2015.