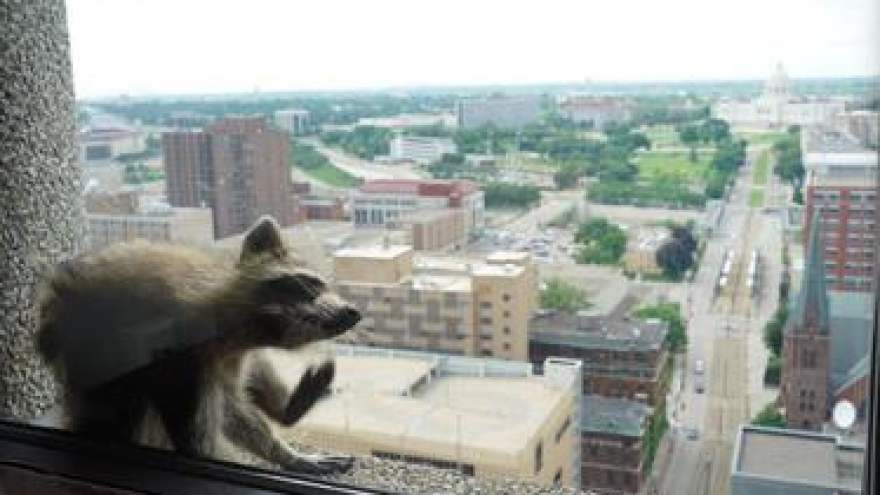 ST. PAUL, Minn. (AP) -- A raccoon that became an internet sensation by climbing a 25-story office tower in downtown St. Paul, Minnesota, has been safely trapped and will be released.

Chelsey DeMers, assistant general manager of the company Wildlife Management Services, says the raccoon was caught in a live trap on top of UBS Plaza early Wednesday. She says it's in good condition and is eating and that a company technician is expected to set the animal free later Wednesday at a site yet to be determined.

The raccoon's adventures caused a stir on social media as it scaled the tower Tuesday, with many Twitter users voicing concern for its safety or joking about the drama as its climb was livestreamed.

Nearby Minnesota Public Radio, which followed its climb, branded it #mprraccoon.

ST. PAUL, Minn. (AP) -- A raccoon that appeared to be stranded on a ledge after climbing more than 20 stories of a high-rise office building in downtown St. Paul, Minnesota, has made it to the roof, easing concerns that the animal could plummet to its death.

Onlookers and reporters tracked the raccoon's progress Tuesday as it scaled the UBS Tower. By early Wednesday, the animal made it to the roof, where St. Paul Animal Control had placed cat food and a trap in hopes of enticing the animal to safety.

The raccoon's adventures caused a stir on social media, with many Twitter users voicing concern for its safety or joking about the drama surrounding the animal's exploits. Minnesota Public Radio, from a building less than a block away, branded the raccoon #mprraccoon.

(CBS NEWS/ASSOCIATED PRESS) ST. PAUL, Minn. -- A raccoon stranded on the ledge of a building in St. Paul, Minnesota, captivated onlookers and generated interest on social media after it started scaling an office building. CBS Minnesota reports a live trap has been set on the roof, with cat food to lure the raccoon.

Onlookers and reporters tracked the critter's progress at it climbed the UBS Tower on Tuesday, interrupting work and causing anxiety for some. By Tuesday afternoon, it had stopped on a ledge more than 20 stories high.

Minnesota Public Radio branded the raccoon with the hashtag #mprraccoon, which became the top trend on Twitter. The woodland creature also had its own Twitter account, with one tweet saying, "I made a big mistake." Many feared for the raccoon's safety.

The raccoon was first spotted on a ledge Tuesday morning, just a few stories high. St. Paul Animal Control believed it may have been there all night before it started heading skyward.

Animal Humane Society humane agent Keith Stress told CBS Minnesota that rescuers typically try to give the animal enough time to get out of the situation themselves. Stress said animals rarely get into situations that they can't get out of and if it gets to the point where intervention is the only chance for the animal, then a decision will be made about which agency will take the lead in the rescue effort.