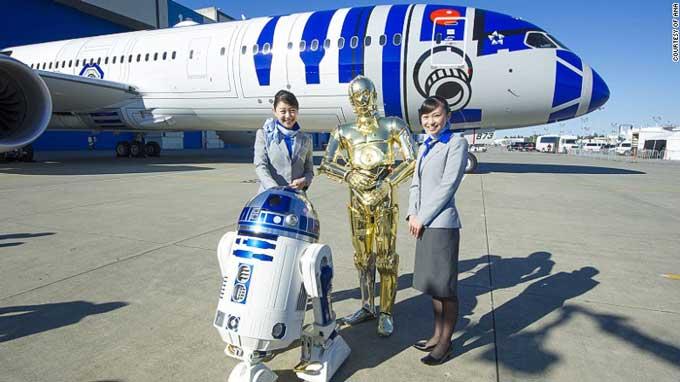 (CNN)These may not be the droids the Stormtroopers are looking for, but for "Star Wars" fans this is definitely the Dreamliner.

ANA, Japan's largest airline, rolled out the hotly anticipated R2-D2 ANA jet on Saturday -- the first of three "Stars Wars"-themed vessels to go into service on international routes this fall.

The Boeing 789-7 Dreamliner's livery and in-flight decorations are inspired by the robust droid R2-D2, who served Anakin and Luke Skywalker in the movie franchise, and will now serve earthlings flying between Tokyo and Vancouver.

The 215-seater jet was showcased at the Boeing Everett Factory near Seattle, and is scheduled to take to the skies on October 18.

ANA's partnership with Disney is part of efforts to build buzz for the release of "Star Wars: The Force Awakens" later this year.

Passengers will be able to watch all six of the previous "Star Wars" movies from their seats -- the first time any of the films have been shown as in-flight entertainment.

After its initial stint on the Tokyo-Vancouver route, the R2-D2 Jet will fly between Japan and cities in the U.S., Europe, Australia, China and Indonesia.

Next unveiling will be November

The next plane to be rolled out will be a Boeing 767-300 with livery inspired by BB-8, a brand new character from "Star Wars: The Force Awakens," which will fly domestic Japanese routes from November onwards.

March 2016 will see the unveiling of another R2-D2 plane, this time a Boeing 777-300 ER, which will fly international routes between Japan and North America.

Exact routes have yet to be announced, but fans will be able to see the planes' schedules at ana-sw.com.