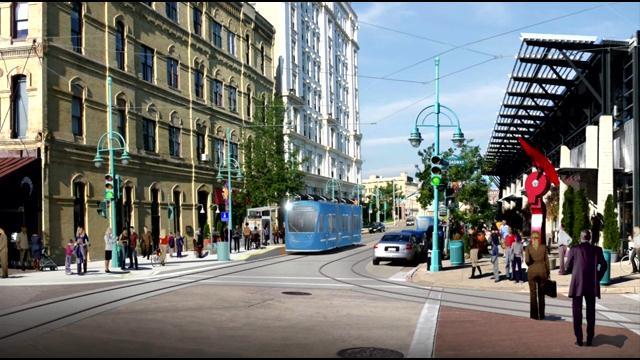 One day later, volunteers say they have collected at least 1200 signatures on a petition that could de-rail the City of Milwaukee's streetcar project.

Ald. Bob Donovan is leading the charge against the proposed $124 Million project.  Federal funds will pay for more than half of it.  About $55 Million will come from the federal Interstate Cost Estimate (ICE) funds.  Another $10 Million in federal grants are pending as long as Milwaukee goes through with building the streetcar.  Local funds will cover the remaining balance.

\"To mislead the public-- and suggest that there's other ways we can spend this money--  is deeply dishonest,\" said Ald. Nik Kovac, who supports the streetcar project.

Donovan and other opponents say the money should be spent elsewhere.  Donovan said Tuesday he wants the federal money to go toward re-paving the roads and expanding Milwaukee's bus system.  Donovan emphasizes the federal ICE funds have been re-allocated twice by congress.

Kovac says the federal ICE funds have moved out of congress' hands and into the Federal Transit Administration.

Kovac says the money is earmarked specifically for a new rail system in Milwaukee, but  Donovan emphasizes it just takes a call to a power player, like Rep. Paul Ryan (R-Wisconsin), now head of the \"Ways and Means Committee\" to begin the process of changing that earmark in Washington.

\"Certainly the funds can be re-allocated if there's a desire on the part of the mayor and the congressional delegation to do just that,\" said Donovan.

Donovan, a candidate for the 2016 mayor's race, knows Mayor Tom Barrett will not give up his vision of bringing a rail system to Milwaukee.

\"If they had any influence in the right direction, we'd be able to get this money re-allocated,\" said Donovan.

The Milwaukee Common Council is scheduled to take up the streetcar project again on January 21st.  Petitioners against the project are trying to get 35,000 signatures before that meeting.