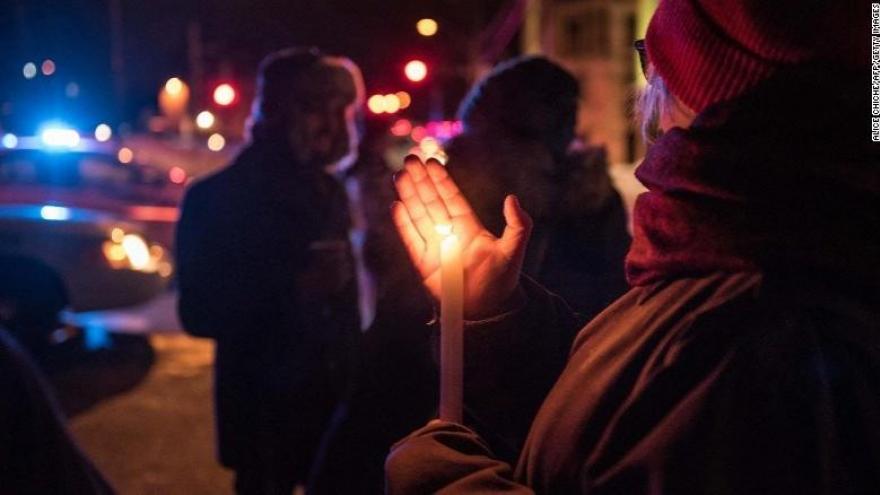 Alexandre Bissonnette was identified as the person who opened fire at the Quebec Islamic Cultural Center, according to a source with the Royal Canadian Mounted Police and a Quebec City court clerk.

Bissonnette faces six counts of first-degree murder and five attempted murder charges, according to the verified Twitter account of the Quebec Royal Canadian Mounted Police. He was a student at Laval University in Quebec City, according to the school.

Goodale, speaking to reporters at an Ottawa news conference, said the attack was one that would have been difficult to prevent. The terror threat level remains unchanged, he said.

"At this time, the National Terrorism Threat Level for Canada remains at 'medium,' where it has stood since 2014," Goodale said, referring to the threat level after the October 2014 incident in which Michael Zehaf Bibeau killed Cpl. Nathan Cirilloan, an army reservist, as he stood sentry at Canada's war memorial in Ottawa.

Witnesses said the mosque gunman fired indiscriminately into the crowd of worshipers, which included men, women and children.

Laval officials said they "strongly and unreservedly denounce the unacceptable and terrible acts" at the mosque.

Bissonnette, who was a student in the university's school of social sciences, has been barred from any study or research activities until the end of the current judicial process, the school said.

"Cadets are not members of the Canadian Armed Forces and they do not receive military training," Keirstead said.

No other information was immediately released on Bissonnette, who is in custody.

The province's premier, Philippe Couillard, called the attack an act of terror.The mosque urged the public to not jump to conclusions or spread unsubstantiated rumors.

"Please wait for preliminary result (of the investigation) before circulating rumors," the Quebec Islamic Cultural Center said on Facebook. "The situation is very critical."Another post showed the center's gratitude for the "hundreds of messages of compassion coming from all over."

On Monday night, a procession of candle-holding marchers spilled quietly into the snow-packed streets during a vigil and a gathering at the mosque. Two young women stopped as many people as they could and asked mourners if they wanted pins that said "Welcome to all refugees," in French on the top of the pin.

Milena Babin, a volunteer with the Intercultural Center of Quebec, handed the pins out one by one, explaining that the design was by a local artist.

Babin said the inscription in Arabic at the bottom means welcome to Quebec.

"(The buttons) were originally designed to welcome refugees to Quebec," Babin said. "But we had some leftover, and thought it was a good idea to distribute them tonight."Prime Minister Justin Trudeau was among the throngs of people who attended the vigil. He carried a bouquet of flowers.This is not the first time the mosque has been targeted.

Last year, the cultural center received a wrapped pig's head and a magazine with a pig on its cover, saying "Bonne Appetit," according to a post on its Facebook page. The post reads:

"We just learned that a gesture of hate towards our Great Mosque took place Sunday morning (14 Ramadan) around Salat Al-Fajr! Police was made aware and opened an investigation!"

Under the Quran, pork is prohibited and pigs are considered unclean.Canada's leaders condemned the attack on social media.

Trudeau tweeted his condolences in both French and English.

"Canadians grieve for those killed in a cowardly attack on a mosque in Quebec City. My thoughts are with victims & their families."Later, in a statement on his official site, Trudeau wrote:

"It is heart-wrenching to see such senseless violence. Diversity is our strength, and religious tolerance is a value that we, as Canadians, hold dear.

"Muslim-Canadians are an important part of our national fabric, and these senseless acts have no place in our communities, cities and country. Canadian law enforcement agencies will protect the rights of all Canadians, and will make every effort to apprehend the perpetrators of this act and all acts of intolerance."

Premier Couillard said Quebec's support of Muslims will not waver.

"Let's unite against violence," the post reads. "We stand in solidarity with the Muslim people of Quebec."