Putin Calls Jet's Downing 'Stab in the Back,' but Turkey says Warning Ignored 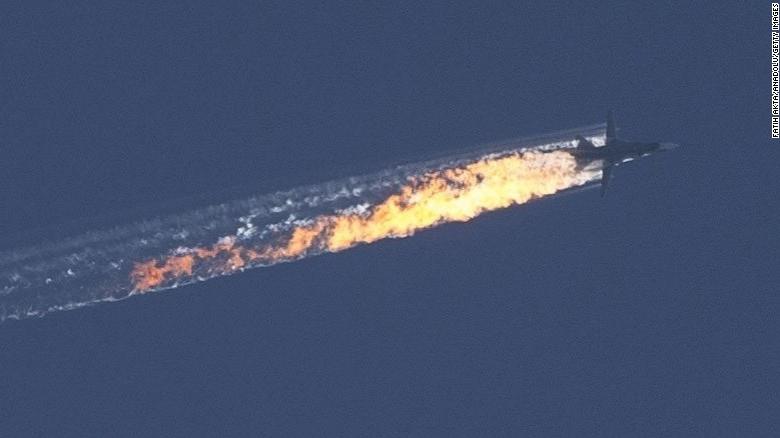 Istanbul (CNN)One of the world's most volatile regions was roiled further Tuesday when Turkey shot down a Russian warplane near the Turkish-Syrian border. Turkey said it hit the plane after it repeatedly violated Turkey's airspace and ignored 10 warnings.

One of the two pilots was killed in the air by fire from the ground, according to Russia's state-run news agency RIA Novosti. The fate of the second pilot wasn't disclosed.

Meanwhile, a Russian marine was killed on Tuesday during an operation to rescue the two pilots, who were flying an Su-24 warplane, according to RIA Novosti.

Turkey and Russia exchanged bellicose language after the downing of the plane, raising fears in the international community that the brutal Syrian conflict could spiral into something much wider.

The Russian plane was warned numerous times beforehand and was subsequently dealt with because it "did not answer our warning," Turkish President Recep Tayyip Erdogan said Tuesday.

There was no ISIS presence along that border area, but there were Turkmen there, Erdogan said. So anyone who bombs that area attacks "our brothers and sisters -- Turkmen," Erdogan said in Ankara. (Turkmen are a Turkic-speaking, traditionally nomadic people who live primarily in Central Asia, but a small minority of them can be found in the Middle East, primarily in northern Iraq, Iran and Turkey.)

Erdogan said the plane incident was not something Turkey wanted to see happen, and "this does not indicate any animosity" toward any country.

He said the downed jet was "one of two" planes but didn't elaborate beyond that.

It's been Turkey's cool approach that has prevented similar incidents up to now, he added.

Turkey's ambassador to the United States, Serdar Kilic, tweeted: "Understand this: Turkey is a country whose warnings should be taken seriously and listened to. Don't test Turkey's patience. Try to win its friendship."

Russian President Vladimir Putin said the downing of the Russian plane would have "serious consequences for Russia's relationship with Turkey."

The shooting down of the plane, Putin said, "represents a stab in the back by the terrorists' accomplices. I can't describe what has happened today in any other way. Our plane was downed over Syrian territory by an air-to-air missile from a Turkish F-16 jet.

"The plane fell on Syrian territory 4 kilometers (2.5 miles) away from the Turkish border. It was flying 1 kilometer away from the Turkish border when it was attacked. In any case, neither our pilots nor our jet posed any threat to Turkey. That is obvious. They were carrying out an operation fighting against ISIL in Northern Latakia." (ISIL is another acronym for ISIS.)

Erdogan on Tuesday pointed how Turkey has been hosting 2 million Syrian refugees while European countries have panicked over smaller numbers seeking refuge there.

It's not possible to resolve terrorism or refugee problems without finding a sustainable solution to Syria, but the Syrian regime of President Bashar al-Assad and countries that support it have started a new assault which does not fit with finding a resolution for the area, Erdogan said.

Turkey vehemently opposes the Assad regime. Russia is backing it.

After holding an emergency meeting in Brussels on Tuesday, NATO's governing body, the North Atlantic Council, said Turkey informed the body about the plane's downing.

"I have previously expressed my concern about the implications of the military actions of the Russian Federation close to NATO's borders," the NATO leader said. "This highlights the importance of having and respecting arrangements to avoid such incidents in the future.

"As we have repeatedly made clear, we stand in solidarity with Turkey and support the territorial integrity of our NATO ally, Turkey," he added.

Not long after the plane was shot down Tuesday morning, spitting fire and diving nose-first toward the ground, Turkey claimed responsibility. Turkey's semiofficial outlet, the Anadolu Agency, quoted Turkish presidential sources as saying the Russian Su-24 was "hit within the framework of engagement rules" in Syria's Bayirbucak area, near the border with Turkey.

Both pilots ejected from the plane, but the fate of the second pilot is unknown, Sputnik reported. ISIS does not operate in the area where the plane went down. But other rebel groups do, including al Nusra Front -- al Qaeda's affiliate in Syria -- along with more moderate U.S.-backed groups.

Abu Ibrahim al-Sheghri, the military leader in the 10th coastal brigade and part of the Turkmen Mountain Military Operation Room, told CNN that the body of one of the pilots had been found in the Nibh Almur area of Syria. The brigade is searching for the other pilot in the same area, he said.

And Turkish Radio and Television Corporation, Turkey's national public broadcaster, aired footage of what it said were Russian helicopters searching for the pilots.

Early this year, Moath al-Kasasbeh, a Jordanian pilot whose plane crashed in Syria the previous December, was burned alive by ISIS while he was trapped in a cage.

U.S. President Barack Obama said Tuesday that "Turkey has the right to defend its country and its airspace," but he acknowledged that U.S. officials "don't have all the information yet."

Obama said it was important that Russia and Turkey are in contact with one another to "take measures to discourage any kind of escalation."

He said the plane incident "points to an ongoing problem with the Russian operations" in Syria, which are taking place very close to the Turkish border and going after "moderate opposition" that has the support of Turkey.

If Russia instead focused on fighting only ISIS, "some of those conflicts or potential for escalation are less likely to occur," Obama said.

He said the encounter also "underscores the importance of our moving the political track along as quickly as possible" when it comes to resolving the Syrian civil war.

Obama plans to speak with Erdogan in the near future, he said.

Obama held a press conference with French President Francois Hollande at the White House about the recent terror attacks on Paris.

Hollande called the plane incident "a serious one" and said Turkey is providing information to NATO "so that we can find what really happened."

"We must prevent any escalation," Hollande said.

Hollande will be traveling to Russia this week to meet with Putin and discuss taking action against ISIS.

"We must find a solution to the Syrian crisis," Hollande said.

Turkey released a purported image of the flight path of the plane showing it had violated Turkish airspace. Turkey said it had issued 10 warnings to the aircraft before two F-16s responded "within engagement rules" near the Turkish-Syrian border.

But the Russian Defense Ministry said "objective monitoring confirmed" the plane was not in Turkish airspace.

"The Su-24 bomber jet was in Syrian airspace at the altitude 6,000 meters, the Russian Defense Ministry said," according to Sputnik. "The pilots were reportedly able to parachute out of the jet before it crashed."

A U.S. defense official told CNN that Turkey informed Washington that it had shot down a Russian military aircraft near the Syrian border after an airspace violation. U.S. forces were not involved in the incident, the official added.

Syria has been embroiled for more than four years in a brutal civil war that has killed hundreds of thousands of people, sent millions of families fleeing and laid waste to entire cities.

Skirmishes between Turks and Syrians have taken place in the past, with Turkish officials accusing Syrian planes of violating Turkish air space.

"The moment of the plane falling into Bayirbucak region across from Hatay's Yayladagi was captured on camera," the Anadolu Agency reported. "The pilot's evacuation via parachute was also captured. Heavy smoke has been seen in the area where the plane fell."

Sajjan Gohel, international security director for the Asia-Pacific Foundation, a think tank, described the downing of the plane as "a very significant escalation."

"It's very much the last thing that's needed right now, especially in the aftermath of the Paris attacks, when there was hope that Russia could form an alliance with France and with the United States against ISIS," Gohel said. "This is going to complicate things. This is going to add unnecessary tensions that really weren't required at this critical juncture."

He said the downing of the Russian plane would hamper efforts to form a united front against ISIS.

"This is a situation that unfortunately was almost inevitable at some point, because Turkey has long been accusing Russia of interfering in their airspace," Gohel said. "They've threatened them in the past. And even though economic relations between the two countries are strong -- politically, there have been tensions recently."

A NATO official told CNN that "when Russian jets violated Turkish airspace a few weeks ago, the Council did meet in an extraordinary session, which resulted in a condemnation of the incursion."

The official would not comment on whether the alliance was in contact with Russian authorities over the incident.

Syria's internal conflict has become a massive proxy war for numerous international powers, both in the region and outside it -- a situation that has added to the perception that incidents such as Tuesday's plane downing were inevitable.

Currently, the United States, Russia, France, Australia, the Gulf states, Turkey, Israel, Iran, Jordan and Hezbollah are involved, one way or another, in military activity in Syria.