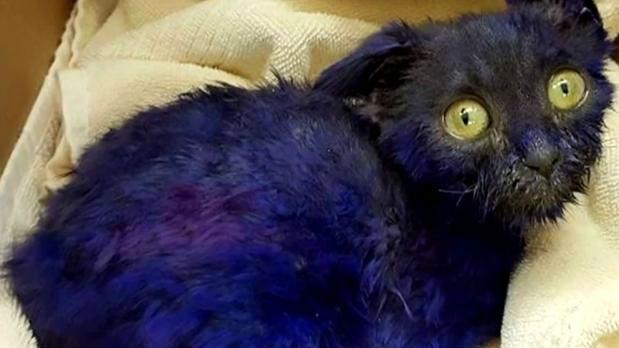 (CBS NEWS) An eight-week-old kitten that was dyed purple and badly injured when it was dropped off at the San Jose Animal Shelter earlier this week was on the road to recovery Thursday, according to the chief veterinarian of the 9 Lives Foundation.

Veterinarian Monica Rudiger told the Bay Area Newspaper Group that the wounds the kitten - nicknamed Smurf - was suffering from led her to believe it had been used as "bait" for a large animal, possibly a dog.

"I've seen a lot of animals used as bait for other animals, it looks to me like he was used as a chew toy," she told reporters. "He obviously wasn't killed by the dog or whatever animal it was but he was pretty badly injured."

The kitten was found in a box on Monterey Road in San Jose on Monday and was taken to the San Jose Animal Shelter. Officials there called The 9 Lives Foundation and asked for assistance.

Smurf had 20 deep canine puncture wounds and was running a temperature of 105 degrees when he arrived. Some of the wounds will require surgery to heal, Rudiger said.

Rudiger said that in her 16 years of rescue work, she had not ever seen a cat colored with fabric dye.

"I can only imagine why someone would dye him purple," she told the Bay Area Newspaper Group. "I think there are people who find it amusing to take small, innocent animals and use them as play toys."

Smurf will need a few weeks of convalescence before going up for adoption.