Protests at Colorado church over handling of gay woman's funeral 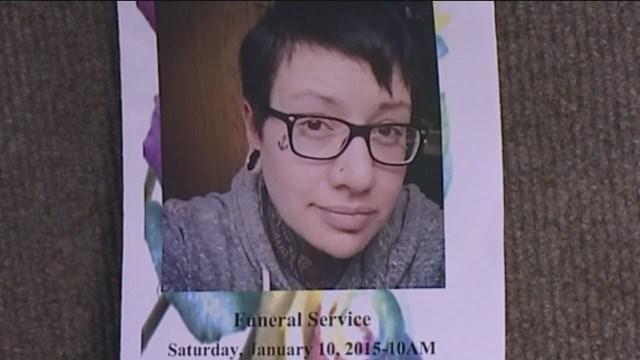 (CNN) -- Family and friends of a gay woman in Colorado have expressed anger at a church's refusal to show a video at her funeral that contained images of the woman kissing her partner.

The service Saturday for Vanessa Collier in a Denver suburb was abruptly moved to a funeral home across the street after mourners had already arrived at the church, according to family and friends of the deceased woman.

\"People started taking their seats at 10 a.m.\" at New Hope Ministries church, Jose Silva, a friend of Collier's and spokesman for the family, told CNN affiliate KMGH. \"At 10:15, the pastor said, 'Due to technical difficulties, the funeral is being moved.'\"

The reason for the sudden change was a tribute video about Collier, who died December 29 at the age of 33.

Pastor Ray Chavez of the church, New Hope Ministries, asked the family if they would be willing to edit out the images of Collier kissing her partner, said Gary Rolando, the chaplain who conducted the service.

\"The family graciously declined\" and asked to move the service to the funeral home across the street, Rolando told KMGH.

\"They didn't want to edit her life,\" Silva said.

But at the funeral home, \"... the room was too small to accommodate everyone so people were standing and sitting on the floor as well as flooded out into the lobby and had to watch the service on a TV screen,\" Christina Higley, Collier's partner, said in a statement.

New Hope Ministries didn't respond to requests for comment about what happened.

Silva and other friends protested Tuesday outside the church in Lakewood, Colorado, holding signs saying, \"Dignity in Death Vanessa\" and \"You will not find Jesus at New Hope but you will find HYPOCRISY.\"

They are demanding an apology from Chavez.

\"Vanessa was disrespected at what was to be a time to celebrate her life,\" Collier's friends wrote in a Facebook post about their protest.

Rolando, another friend of Collier's family, said New Hope Ministries \"dropped the ball\" by misplacing the video that the family originally gave them the day before the funeral.

\"They lost the video and asked for another copy,\" he told KMGH. \"When it was reviewed, they realized there was content that involved kissing.\"

Rolando said the church had passed the $400 fee that the family paid for the service to the funeral home. The family wants their money back, Silva said.

The family spokesman told CNN the church knew in advance that Collier was a lesbian, and that fact alone wasn't why the funeral ended up being moved. If the family had known about the need to change the video ahead of time, they \"could have rectified this situation,\" he said.

Silva added: \"This is unacceptable. Everybody should have dignity in death.\"

Collier and her partner had two daughters, ages 12 and 7.

\"Having to explain to them why we had to leave was completely heartbreaking,\" Higley wrote.

\"New Hope is very sorry,\" Rolando said. \"It's very sad that it happened the way that it did.\"

The church's website says it is \"a place where those bound by drugs, alcohol, gangs and violence can find an 'Ounce of Hope.'\"

One churchgoer told KMGH that she thinks Chavez has no need to apologize.

\"The pastor stood for what he believes in, and he believes in God's truth,\" said Anita Luna. \"He's not wrong, he's right in what he did.\"

But Silva, who says New Hope is a church he \"once called home,\" disagrees.

\"This is about not being able to have dignity in death for one of God's children,\" he told CNN affiliate KDVR. \"No matter what the circumstances -- if you're black, white, brown, gay, lesbian, transgender -- we all deserve that. And the church did not afford that to us.\"

CNN's AnneClaire Stapleton and Ana Cabrera contributed to this report.