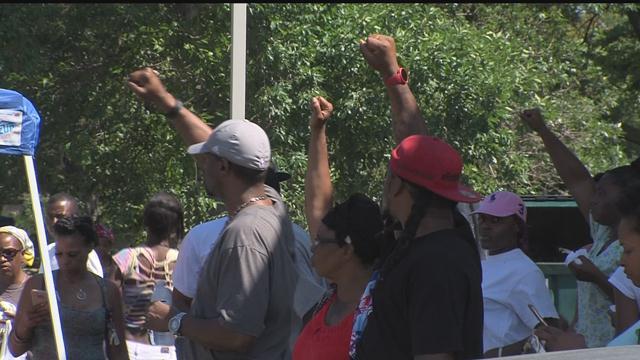 UPDATE: Bhupinder Singh has been charged with Disorderly Conduct with the Use of a Weapon. He has a court date set for next week. His attorney says he wants to review the surveillance video that, according to court documents, matches what Bhupinder Singh told police that he exited the store and pointed the gun in to the air. The charge he faces carries a maximum six months in jail.

Dozens of protestors want to see a gas station near Milwaukee's Sherman Park shut down for good.  It's after they say a store employee fired shots into the air near children.

Witnesses say the incident happened around 10 Tuesday night. The owner says his son was working at the time. Some kids where banging on the window.. while waiting in line to come inside the store. The store doesn't let more than two teens inside at a time. Witnesses say the employee walked outside of the store and started firing shots at the teens. The owner says the shots were fired into the air. The employee has since been fired. Protestors tell me the gas station has a history of using profanity and being disrespectful towards customers and this latest incident is the final straw.

"I talked to the kids who said they felt bullets whizzing past their heads. They were afraid," says witness Frank Sensabaugh.

Protestors say terminating him is not enough.

"For him to be able to shoot at these children, in a reckless manner. He could've hit anybody," says protestor Vaun Mayesbey.

The 34-year-old man that fired the shots has been ordered to the district attorney's office today to review the case. Neighbors plan to protest outside of the gas station until the business shuts down.