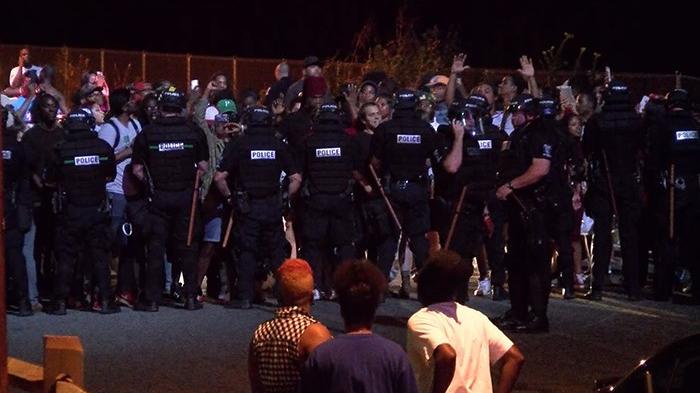 Dozens of people took to the streets Wednesday night after a man was shot and killed by police in Charlotte, North Carolina.  Police say there were at an apartment complex to look for a person with an outstanding warrant when they saw a man get out of a vehicle with a firearm.  That man, later identified as 43-year-old Keith Lamont Scott, got back into the vehicle when officers walked over to him.  Then, the police report states Scott got out of the vehicle "armed with a firearm and posed an imminent deadly threat to the officers who subsequently fired their weapons striking the subject."

The officer who fired the shot was identified as Officer Brentley Vinson. He has been with the department since July 2014.

A woman, who says she is Scott's daughter, lived streamed the scene on Facebook more than an hour after the shooting.  She stated Scott was unarmed and sitting in his car, reading a book and waiting for his son to get off the school bus.  In the video, she said her father was unarmed when he was shot.

At 9 p.m. eastern, large crowds had gathered in the area.

Charlotte Metro PD tweeted just after 10 p.m. that their Civil Emergency Unit was deployed "to safely remove our officers..."  Also, that, a CMPD officer has sustained injuries in an attempt to deescalate agitators during demonstration."

At 11 p.m. large clouds of what appeared to be tear gas could be seen coming from the crowds of protesters after officers in riot gear were seen putting on gas masks.