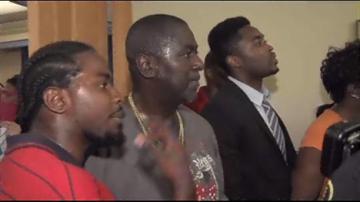 Dontre Hamilton was shot 14 times and killed by a Milwaukee police officer in April of this year.  Last week, protesters stormed a city Police and Fire Commission meeting, demanding justice in Hamilton's death.

In the aftermath of that tense meeting, Chief Flynn suggested that some protesters don't want justice, just attention. Flynn also named names. \"Khalil Coleman is one of the opportunists hijacking this protest... there are many folks, Khalil among them, who seize upon every tragedy in this city to aggrandize themselves and get in front of a TV camera,\" Flynn said last Friday.

An emotional response from Hamilton supporters on Tuesday. Muhibb Dyer, addressing the media gathered at city hall, told Chief Flynn that he wants nothing to do with his so-called opportunity.  \"If Chief Flynn thinks we're opportunists... we wouldn't have the opportunity to stand before the cameras if our people were not dying on the streets every day,\" Dyer said.

About thirty men hosted the news conference at city hall. Among them were Milwaukee Alderman Joe Davis and County Supervisor David Bowen. Bowen said he stands with Khalil Colemand, and also took issue with Flynn's statements. \"Attacking Khalil Coleman is the problem, it is not the solution in this case. Address your own police department,\" Sup. Bowen said.

CBS 58 contacted MPD for a response Tuesday night.  A spokesperson said that Chief Flynn has \"nothing to add\" to his statements last week.
Share this article: