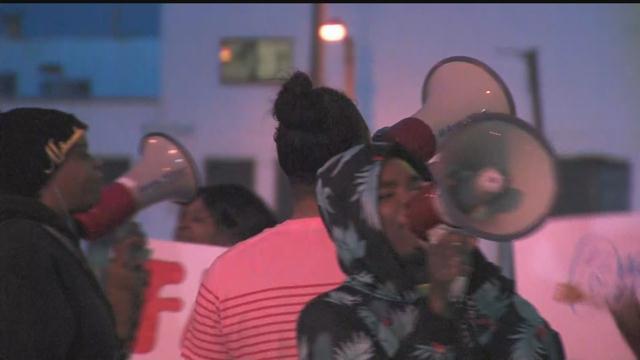 Hundreds of cities across the nation are taking to the streets. The Day of Disruption is part of the Fight for $15 movement. Fast-food workers, home care workers, child care teachers, and airport workers are asking for a $15 minimum wage and union rights.

Protesters gathered at the McDonald's at Miller Park Way in Milwaukee. There was disruption when they took to the streets chanting "Milwaukee is a union town."

Police used their loud speaker to tell anyone in the streets to get on the sidewalk or they'd be arrested. A handful of protesters were handcuffed and escorted off the street to squad cars.

The McDonald's the protesters gathered at had prepared for the 5:00 protest. The chain was fully staffed with managers and law enforcement.

Earlier in the day, workers in Milwaukee took their fight to local McDonald's on 9th and North, and to Milwaukee's City Hall.

The movement started before the sun rose.

"We've got workers like myself all across the country right now outside today standing for 15," said Devonte Yates, a protester.

Tuesday is the national Fight for 15 movement, with over 340 cities holding similar protests.

The national organization says nearly 20 million workers have seen their minimum wage raised since the fight for 15 started in 2012.
Yates says he's been fighting for 15 for years.

"Times are changing. Prices are going up. It's getting harder to buy things. people are struggling every day and it's time for that to change. If you're working a decent job, if you're working 40 hours a week, you shouldn't have to struggle. You shouldn't have to worry about if I'm going to pay the rent or how I'm going to feed my kids," said Yates.

McDonald's released the following statement regarding the "day of disruption"

"McDonald's takes seriously our role in helping strengthen communities as we and our franchisees separately employ hundreds of thousands of people, providing many with their very first job. We invest in opportunities for McDonald's employees to finish high school, earn a college degree and develop the valuable skills necessary to build successful careers even beyond our restaurants"

Some managers inside this McDonald's off Miller park way tell us they got their college degree thanks to the fast food chain.

Protesters say they won't stop until they get "15 and a union."

"It's going to be Christmastime and we're still making 7.25. We can barely pay our rent what makes you think we're going to have Christmas for our children,"said Keila Mcafee.

Mcafee was at the protest at Milwaukee's City Hall. So was Corneil White. He worked in fast food for over 15 years and has since moved on working now at a casino, but he's still fighting for 15. He says it's for his son.

"For him not to go through the struggle of poverty like I did when I was growing up," said White.