Proposed food truck ban for parts of south side fails 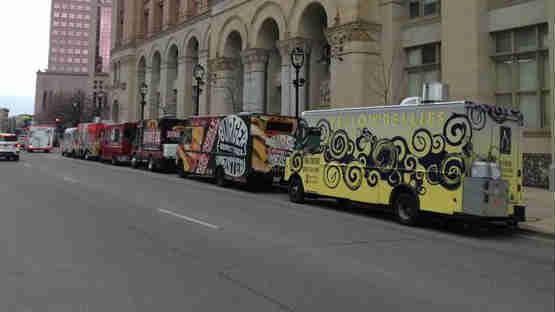 There will be no food truck ban in Milwaukee. Food truck operators hailed the 10-4 vote by the Milwaukee Common Council Tuesday morning. Ald. Joe Dudzik's proposal to ban trucks on some streets in his district failed.

Some food truck operators parked their food trucks on Water Street outside City Hall before the common council meeting as a way to show support.

Alderman Dudzik said he had complaints from people about food trucks blocking traffic, making too much noise, and littering in his district. Dudzik says he's not against food trucks at all. He just wants to make sure they're following the rules and not angering residents.

The food truck operators understand the concerns. They just worried that an outright ban on some streets could lead to more sweeping bans. They say it's a win for small business. Dudzik says he'll just use an old ordinance to make sure food trucks follow the rules in his district.

\"What I thought was the big concern was if anyone has a problem with one single food truck that they're going to try to ban us rather than deal with the one truck,\" Eats and Treats Food Truck operator Chris Jourdan said. \"[Or to go]through the health and licensing departments and protocols that are set up for the city to keep it operating well.\"

\"The ordinance that goes back to maybe the 50's says that no vendor can set up shop on a street that has a resident,\" Dudzik said.