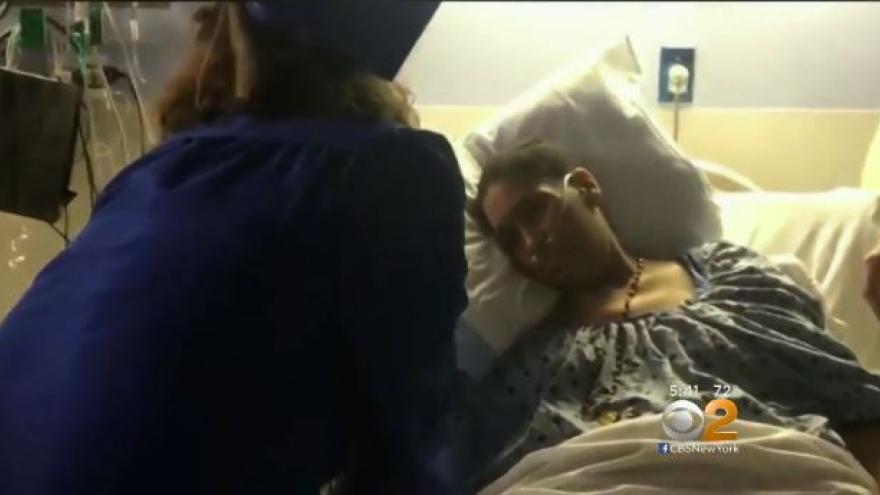 WASHINGTONVILLE, N.Y. (CBSNewYork) — A local high schooler had an early graduation ceremony in order for her terminally ill mother could attend.

The bedside ceremony was one of the last things Elizabeth De Leon asked for after a grueling three-year battle with colon cancer.

When her health took a turn for the worse a few months ago, the 51-year-old declared that she wanted to live long enough to see her daughter graduate from Washingtonville High School on June 21st.

“I would always tell her I won’t get my cap and gown until graduation,” daughter Cassidy told CBS2’s, Elise Finch.

Richard Pagan is Elizabeth’s oldest child and was determined to make the graduation happen for his sister and mother. He called principal Brian Connolly late last week and asked for help.

“I was able to get into the school over the weekend, retrieve her diploma and a cap and gown and bring it to the hospital,” Connolly said.

The principal also presided over the bittersweet Memorial Day ceremony, where he talked about what an asset the cheerleader and talented artist Cassidy is to the school community.

Elizabeth’s family said she was catatonic in the days before the graduation, but she was alert and smiling as soon as she saw her daughter in her cap and gown.

“She was happy, and me and Cassidy told her ‘mom, it’s okay. You can go now’,” Pagan said.

Elizabeth De Leon passed away shortly after the ceremony, but her children say they’re grateful to everyone who helped them grant their mother’s dying wish. She’ll be laid to rest on Monday.

Cassidy will graduate with the rest of her class on June 21st.