Motorcade for @POTUS arrives at La Crosse MTU. Biden is expected to talk infrastructure after a plan to focus more on agriculture was apparently scrapped pic.twitter.com/q41MmOZyTl

"America has always been propelled into the future by landmark national investments," Biden said. "Investments that only the government has the capacity to make."

"More than 1,000 bridges here in Wisconsin are rating as structurally deficient by engineers," Biden said. 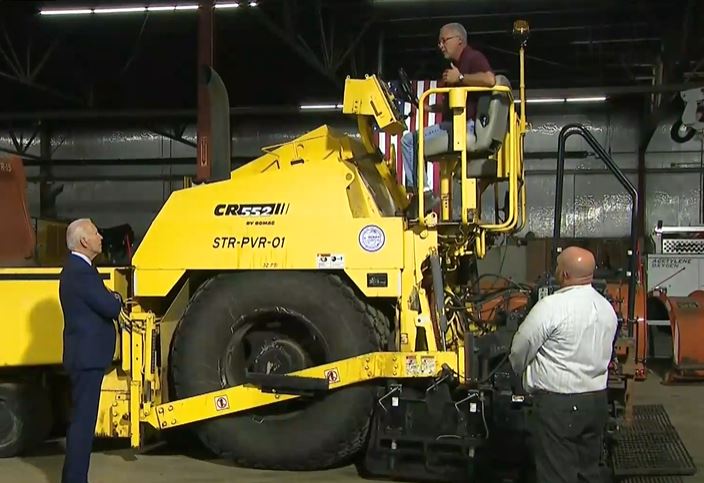 The president said the plan would provide funding for Milwaukee and clean drinking water.

"Milwaukee has more than 160,000 water service lines," Biden said. "More than 70,000 of them. Nearly half, have lead service lines. And by the way, I'm not picking on Wisconsin. Every state's like this."

Biden also said the package would help the more rural areas of the state by providing access to broadband, an issue Wisconsin had been trying to address for years.

"No farmer here in Wisconsin should lose business because they don't have a reliable connection to internet, know what to buy, know when to sell and know what's going on," Biden said.

The original plan called for Biden to talk about agriculture, with U.S. Department of Agriculture Secretary Tom Vilsack. Biden changed plans close to the trip, talked about infrastructure, and Vilsack did not attend.

The Republican Party of Wisconsin issued the statement:

"After fighting for a death tax that would crush multi-generational farms, creating a labor crisis that has left agriculture businesses without workers and promoting far-left policies that would cripple rural Wisconsinites’ way of life, Joe Biden had the audacity to abandon Wisconsin farmers for a bus station. As Democrats continue to remind Americans how little they care about the Heartland, it’s no wonder that rural Wisconsinites are leaving their party in droves.”

Wisconsin is a critical state on the campaign trail and La Crosse is often a go-to area. Politicians see La Crosse as a model of an American river town.