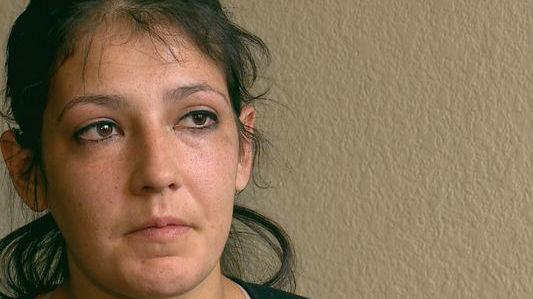 (CBS NEWS) A fast food restaurant in Texas was robbed and the shift manager - who is pregnant - says she was fired after refusing to pay the money back, reports CBS affiliate KHOU.

\"I told them I'm not paying nothing,\" said Marissa Holcomb, former manager of the Popeye's in Channelview. \"I just had a gun to me. I'm not paying the money.\"

The robbery took place March 31 and was captured on surveillance video, according to the station.

The video shows a man with a beanie over his face run into the restaurant waving a gun. The man is then seen forcing all of the employees to the floor before turning his attention to Holcomb.

\"By the back of my shirt, he pulled me up and pushed me to the front,\" she recalled to the station. \"He told me to give him everything out of my safe.\"

Unable to open the safe, Holcomb opened the cash registers and the gunman ended up getting away with nearly $400, reports the station.

Holcomb says that after the robbery, one of her managers gave her an ultimatum: Pay the money back or you're fired.

\"I don't think it's right because now I'm struggling for my family because what I had to do to keep my life,\" said Holcomb, who is pregnant with her fourth child.

KHOU reports Holcomb was fired from Popeye's less than 36 hours after the robbery.

A spokesperson for the Popeye's franchise owner, Z&H Foods Inc., told the station Holcomb was fired because she violated policy by leaving too much money in the register - something she has allegedly done before.

The spokesperson also said that if Holcomb was given the option to pay the money back, the company knows nothing about it.

The Popeye's corporate office in Georgia referred the station back to the local franchisee.

Holcomb told the station the reason why there was so much money in the register is because it was busy that day -- they were offering a 2-piece chicken meal for $1.19. She says the restaurant made the $400 within one hour.

Now, Holcomb is left looking for a job -- while 5 months pregnant.

\"I mean who's gonna call me? I'm 5 months pregnant,\" she said. \"The fact that I got robbed at gunpoint and it's like nobody cares.\"
Share this article: