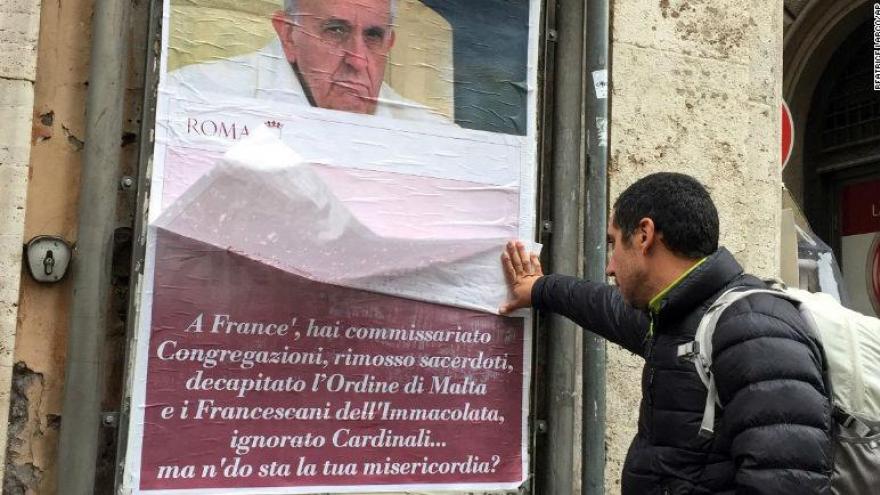 Rome (CNN) Posters of a stern-looking Pope Francis appeared on walls around Rome on Saturday, condemning his actions against some conservative Catholics and asking, "Where is your mercy?"

Written in local Roman dialect, the posters lamented that the Pope had "removed priests; decapitated the Knights of Malta" and "ignored Cardinals," echoing some of the major complaints some conservative Catholics have about Pope Francis' recent decisions. The posters were not signed by any group.

On the day the posters appeared the Pope finalized a months-long battle with the Knights of Malta by appointing a Special Delegate from the Vatican and giving him "all necessary powers" to help renew the traditional Catholic Order.

he Knights of Malta have a unique "sovereign" standing within the Catholic Church, similar to that of a separate country, and they had contested the legality of the Pope's intervention into their order.

Last month the Pope forced the resignation of the head of the Knights of Malta, former Grand Master Matthew Festing, who had publicly opposed him.

The reference in the poster to "decapitation of the Knights of Malta" refers to this battle.

Criticism of the pontiff

Within a few hours of their appearance, the posters had been taken down or covered over by "Illegal Posting" signs from the City of Rome.

Conservative criticism of Pope Francis has intensified since November, when he refused to answer an official letter sent to him by four cardinals. The letter criticized his move to allow divorced and remarried Catholics to receive communion.

That issue has divided many in the Catholic Church and has left bishops around the world arguing about the Pope's intentions and how to implement the directive.

One of the signers of that letter, known as a dubia, was conservative US Cardinal Raymond Burke, whom the Pope removed as the head of the Vatican's Supreme Court in 2014 and named as his papal liaison to the Knights of Malta.

On Saturday, the Pope once again effectively sidelined Cardinal Burke by appointing Archbishop Angelo Becciu as his "special delegate" to the Knights and his "exclusive spokesman" in relations between the order and the Vatican.

Defenders of Pope Francis claim the posters are a sign that the Pope is doing something right.

Fr. Antonio Spadaro, editor of Jesuit Vatican journal La Civiltà Cattolica and a friend of Pope Francis, tweeted from Rome: "It's a sign that he's doing well and causing A LOT of bother."

When asked about conservative criticism of him in a November 2016 interview with Italian bishops' newspaper Avvenire, the Pope replied, "I don't lose any sleep over it."