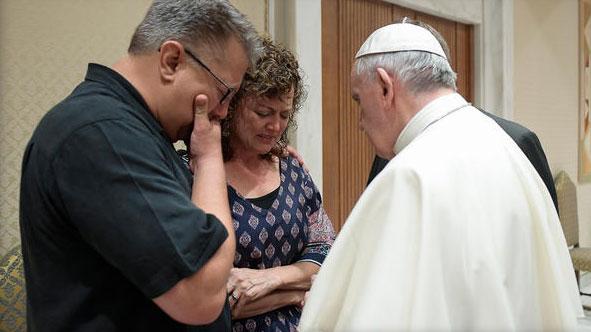 VATICAN CITY (CBS NEWS)-- The Vatican says Pope Francis has met with the parents of a U.S. college student whose body was found in Rome's Tiber river this week.

A brief Holy See statement said Francis expressed to Beau Solomon's parents strong sentiments of "compassion and his closeness in prayer to the Lord for the young man who died so tragically."

The pope held the unscheduled meeting at the Vatican early Wednesday morning.

Solomon was last seen early Friday at a bar popular with U.S. students in the Trastevere neighborhood, just hours after arriving in Rome. His body was discovered close to a bridge over the Tiber, about a mile south of Trastevere.

The ANSA news agency said preliminary autopsy results indicated that Solomon had suffered injuries consistent with a fall. On Tuesday, police said they had detained a homeless man in connection with the investigation.

Police identified the lone suspect as Massimo Galioto, a 40-year-old from Rome. In a statement Tuesday, police said he was taken into custody because he was "seriously suspected of aggravated homicide for futile motives."

Authorities were looking into whether Solomon, of Wisconsin, was robbed and killed after his body was found with a head wound and his credit card was used after his disappearance, his brother said Monday.

Cole Solomon, Beau Solomon's 23-year-old brother, told the Milwaukee Journal Sentinel on Monday that investigators are treating the incident as a murder. He said his brother's body was found with a head wound and blood on his shirt. He added that thousands of dollars were charged to Beau Solomon's credit card after his disappearance.