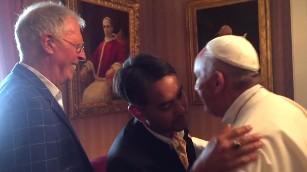 (CNN)The day before Pope Francis met anti-gay county clerk Kim Davis in Washington last week, he held a private meeting with a longtime friend from Argentina who has been in a same-sex relationship for 19 years.

Yayo Grassi, an openly gay man, brought his partner, Iwan Bagus, as well several other friends to the Vatican Embassy on September 23 for a brief visit with the Pope. A video of the meeting shows Grassi and Francis greeting each other with a warm hug.

In an exclusive interview with CNN, Grassi said the visit was arranged personally with the Pope via email in the weeks ahead of Francis' highly anticipated visit to the United States.

"Three weeks before the trip, he called me on the phone and said he would love to give me a hug," Grassi said.

The meeting between the Pope and gay couple adds another intriguing twist to the strange aftermath of Francis' first-ever trip to the United States. Since news broke on Tuesday of Francis' meeting with Davis, conservatives have cheered the seemingly implicit endorsement, while liberals have questioned how much the Pope knew about her case.

The two encounters -- one with a gay couple and one with a government official who ardently opposes homosexuality -- have left the Vatican scrambling to issue statements that seek to de-politicize the Pope's meetings and agenda.

On Friday afternoon, Vatican spokesman the Rev. Federico Lombardi said that Grassi had asked to present his friends to Francis in Washington.

"As noted in the past, the Pope, as pastor, has maintained many personal relationships with people in a spirit of kindness, welcome and dialogue," Lombardi said.

Earlier on Friday, the Vatican said that the meeting with Davis was not intended as a show of support for her cause and "the only real audience granted by the Pope at the nunciature (embassy) was with one of his former students and his family."

"That was me," Grassi said.

Grassi, who is 67, added that he is willing to talk about his private moment with the pontiff because he was upset about media coverage of the Pope's meeting with Davis.

"I want to show the truth of who Pope Francis is," he said.

Pope Francis taught Grassi in literature and psychology classes at Inmaculada Concepcion, a Catholic high school in Sante Fe, Argentina, from 1964-1965. Grassi said that he is now an atheist.

Grassi said the Pope has long known that he is gay, but has never condemned his sexuality or his same-sex relationship. In the video, Francis says he recalls meeting Grassi's boyfriend in Rome.

Grassi said that he asked for the meeting in Washington because the friends he brought along have been through difficult times and wanted to receive of a blessing from the pontiff.

At the end the meeting, the Pope hugs both Grassi and Bagus and kisses them on the cheek.

"Obviously he is the pastor of the church and he has to follow the church's teachings," Grassi added. "But as a human being he understands all kinds of situations, and he is open to all kinds of people, including those with different sexual characteristics."

While not changing church teaching, which considers same-sex relationships sinful, Pope Francis has often emphasized mercy over judgment. In 2013, for example, he famously said, "Who am I to judge" gay priests who seek to do God's will. He also reportedly met with a transgender man from Spain in January of this year.

At the same time, the Vatican has refused to recognize France's ambassador to the Holy See, Laurent Stefanini, who is openly gay. And Francis has show little inclination to adjust church doctrine on sexuality.

"It reminds us, again, that the Pope meets with all sorts of people on his trips and that such meetings are not an 'endorsement' of anything," said the Rev. James Martin, a Jesuit priest and editor at large at America magazine.

"In this case, for example, he is not endorsing same-sex marriage. But if Mr. Grassi's account is accurate, then it makes me happy to know that the Pope keeps in contact with his old friends, both gay and straight. For friendship and welcome are at the heart of the Christian life."

This October, the Vatican will hold a major meeting, called a synod, to discuss how to minister to gays and lesbians, among other issues facing modern Catholics.

While Grassi describes his relationship to the Pope as very close, they haven't always agreed on same-sex rights.

"You have been my guide, continuously moving my horizons—you have shaped the most progressive aspects of my worldview," Grassi wrote to the future Pope in an email, according to National Geographic magazine. "And to hear this from you is so disappointing."

Grassi told CNN that Francis -- then Cardinal Jorge Margio Bergoglio -- wrote back, saying that he was sorry to have upset his former student and promising that "homophobia" had no place in the Catholic Church.

Grassi said he believes the Pope was "misled" into meeting with Davis, who served six days in a Kentucky jail for refusing to issue marriage licenses to same-sex couples.

Davis' lawyers had portrayed the papal meeting as an endorsement of her cause. After several days of questions and culture-war sparring, the Vatican said that was not the case.

"The Pope did not enter into the details of the situation of Mrs. Davis, and his meeting with her should not be considered a form of support of her position in all of its particular and complex aspects," Lombardi said in a statement issued Friday morning.

The question of who, exactly, set up the meeting between Davis and the Pope has been the subject of fervid media speculation this week.

Vatican officials have said that such an encounter could only have taken place with the planning and approval of the Holy See's nuncio -- or envoy -- to the United States, Archbishop Carlo Maria Viganò.