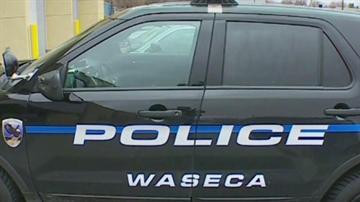 (CNN) -- When Chelsie Shellhas saw a tall young man slip into a storage locker and shut the door behind him one evening this week, it just looked wrong. She dialed 911.

Her instincts were right: Behind the door were bomb-making materials, police in Wacesa, Minnesota, said Thursday. Her call thwarted a cunningly planned gun and bomb attack at a school, they say.

John David LaDue, 17, was looking to carry it out in the coming weeks, police said in an official statement.

After Shellhas' call on Tuesday, officers arrived at the storage park to find LaDue among an assortment of gunpowder, pyrotechnic chemicals, ball bearings and a pressure cooker, police said.

CNN does not usually publish the names of minors charged with crimes but is naming LaDue in this case, because his name has been widely reported in his community.

Police locked up the storage bay and took LaDue in for a voluntary interview. He shared a macabre plan, police said.

He is being charged as a juvenile, said prosecutor Brenda Miller.

First, LaDue was planning to kill his father, mother and sister, police said.

He was particularly close to his sister, their music tutor said. Ryan Lano gave LaDue guitar lessons for four years. \"He would almost always come in with his sister, who played the drums,\" he said.

After their slayings, the teen, who idealized the Columbine school shooters, allegedly wanted to set a fire.

The arson, however, would only be a diversion to tie up emergency responders while he carried out the main plot at the school, police said.

Then he'd unleash gunfire on students until police officers arrived, allegedly planning to let them kill him.

Armed to the teeth

The teen's cache in the storage locker contained just pieces of the puzzle.

Police got a search warrant and at 10:30 p.m. arrived at LaDue's home, where he lived with his family.

A bomb squad removed all recovered explosives and destroyed them by controlled detonation at a local airport.

Seemed up to no good

Shellhas and others in her building first saw a young man in their backyard, Shellhas' cousin Katy Harty told CNN's Brooke Baldwin.

As they watched him fiddle with the storage unit for about 10 minutes, they thought perhaps he was trying to break in, Harty said.

Shellhas picked up the phone, and 10 minutes later, police were taking LaDue in. His alleged plan hit frighteningly close to home.

Harty's younger brother is a senior at the targeted school. Her cousin is a freshman there.

\"It's scary; we're both, like, really glad that we did call and didn't just shrug it off,\" she said.

If his Facebook page is any indicator, LaDue is partial to the dark side, and he \"likes\" assault rifles: the AK-101, Heckler & Koch SL8 and Steyr TMP.

In a photo, he can be seen picking an electric guitar with a skull on its shoulder strap; his preferred bands -- more than 190 of them in total -- are predominantly heavy metal.

His taste in movies is dominated by blood, gore, combat and fisticuffs. His favorite authors are Stephen King and a more traditional master of literary darkness, Edgar Allen Poe.

LaDue also seems to like to hunt. His avatar is a picture of himself in hunter's orange, posing with a slain deer with a rifle draped over it.

It was not immediately clear Thursday whether LaDue had retained an attorney.

His mother preferred not to give a statement but told CNN before hanging up the phone: \"Our family is dealing with a lot of grief.\"

LaDue, 17, was in juvenile detention Friday and has made death threats to facility staff, a prosecutor said.

A lucky calendar this year may have prevented him from hatching his plan already.

He had wanted to carry it out on April 20, the 15th anniversary of the mass shooting at Columbine High School in Colorado. But the date fell on Easter week this year, when school was out.