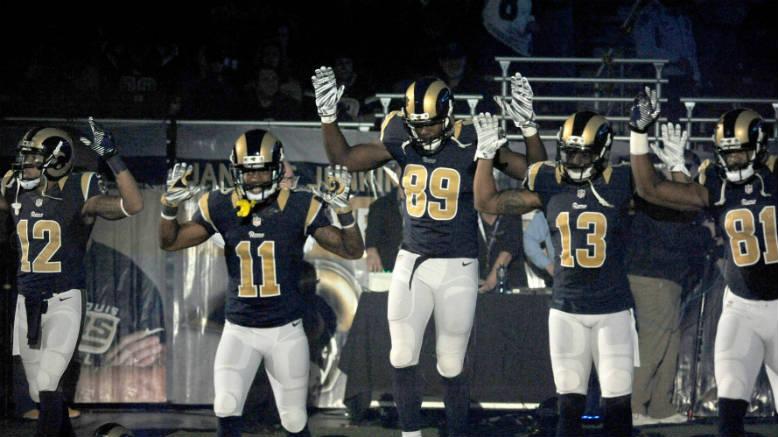 The St. Louis Police Officers Association says it's \"profoundly disappointed\" with those football players who sent a silent but strong message before playing Sunday against the Oakland Raiders.

Stedman Bailey, Tavon Austin, Jared Cook, Chris Givens and Kenny Britt walked onto the field and raised their palms in the air, demonstrating the \"hands up, don't shoot\" gesture that protesters in Ferguson have been using for months.

Some say that Michael Brown, an unarmed black teenager, had his arms up when a white police officer, Darren Wilson, shot him to death August 9 in Ferguson, a St. Louis suburb. Wilson and others say Brown was not trying to surrender and in fact was attacking Wilson.

The football players' action sparked widespread reaction across social media. Some drew parallels between what the Rams players did and the black power salute by two black Olympians from the United States at the 1968 Summer Olympics in Mexico City.

Reaction to the Rams players' move comes as President Barack Obama meets with civil rights leaders Monday to discuss what has transpired in Ferguson.

The football players told CNN affiliate KSDK-TV in St. Louis that they came up with the idea just before the game and wanted their action to represent a solidarity with the people of St. Louis and surrounding areas.

Cook hasn't had time to go to Ferguson because he's been busy with the season and also because the area is dangerous and he doesn't want to get caught up in the violence, he said. But his family members spoke to him about what's been happening, he said. \"Definitely I will be making my trip to Ferguson,\" Cook said.

Bailey stressed that the players' move was just a way to show support for their community.

\"What happened was a tragedy, period,\" Austin said, referring to Brown's killing and the ensuing violence. \"There are things out there bigger than football and we notice that.\"

The police association called for the Rams and the NFL to apologize and discipline the players involved.

\"We respect and understand the concerns of all individuals who have expressed views on this tragic situation,\" NFL spokesman Brian McCarthy said.

He said that the NFL had nothing further to add and that the players would not be disciplined.

The players \"chose to ignore the mountains of evidence released from the St. Louis County Grand Jury this week,\" the police association said in a statement.

\"The gesture has become synonymous with assertions that Michael Brown was innocent of any wrongdoing and attempting to surrender peacefully when Wilson, according to some now-discredited witnesses, gunned him down in cold blood,\" the police association wrote.

The statement quoted the association's business manager, Jeff Roorda, as saying that \"it is unthinkable that homegrown athletes would so publicly perpetuate a narrative that has been disproven over and over again.\"

\"I'd remind the NFL and their players that it is not the violent thugs burning down buildings that buy their advertisers' products. It's cops and the good people of St. Louis and other NFL towns that do.\"

Austin responded to the police feeling that the players' actions suggested they were taking a side.

That wasn't their intention, he said. \"We just want to let the community know that we support them.\"