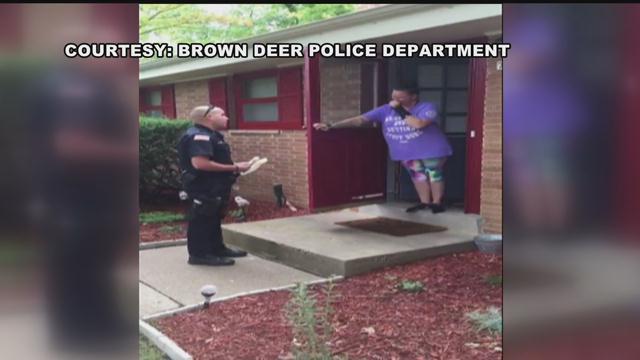 CBS 58—Brown Deer Police officers went beyond the call of duty to help an Army veteran who lost $550 in an online ticket scam.

Nicole Hoffmann saved up money, hoping to surprise her fiancé with tickets to see the Packers play the Cowboys, but lost it all when she tried to buy on Craig’s List.

Hoffmann went to the Brown Deer Police Department and filed a report with Officer Nick Andersen.

“It was disheartening, you know?” Andersen said. “She was a veteran, disabled. She served our country and trusted in somebody she never met before to try and do something nice for somebody in her life.”

It didn't sit well with Anderson, so he made some calls and came up with not only tickets to the Packers/Colts game, but also a Badger Game.

“It was important for us to show that we're human too and we appreciate other people's services,” Andersen said.

Andersen called the gesture small, to Hoffmann it was anything but small.

“I put faith in this Craig’s List ad and I got scammed, but that made me want to lose faith, but then this happened today, and you know, it's giving me faith back,” Hoffmann said.

It will be Hoffmann's first time seeing either team play at home.

And while for police this is about helping a veteran, for Hoffmann this story is about the officers.